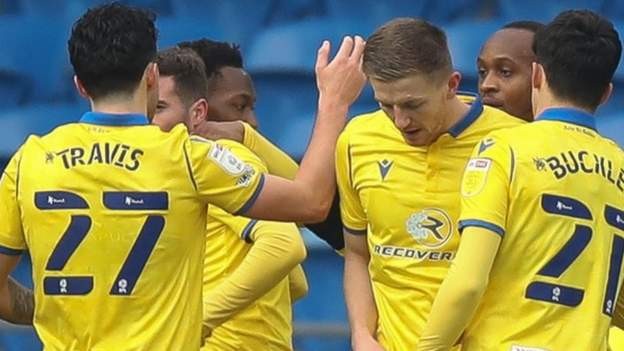 Cardiff are winless in seven league matches against Blackburn since winning 2-1 in August 2016, with Rovers completing a league double over Cardiff for the first time since the 1984-85 campaign under Bobby Saxton.

Blackburn Rovers maintained the pressure on the teams at the top of the Championship at they ground out a 1-0 win at Cardiff with 10 men.

Joe Rothwell gave Blackburn the lead as he cut through the Cardiff defence and finished from outside the penalty area.

Cardiff improved after the break and the visitors saw Ryan Nyambe sent off with 14 minutes remaining as he received a second yellow card.

However, Rovers held on as Cardiff were beaten at home yet again.

The Bluebirds have lost eight of their last nine home league matches, while they have earned fewer points at home overall this season than any other Championship side, with just seven points.

The defeat sees Cardiff remain 20th in the Championship, while Rovers are second on 49 points.

The Bluebirds' task was not helped by the fact this was the second successive game they have been forced to play behind closed doors due to Welsh government Covid-19 restrictions, but Welsh clubs will be able to welcome supporters back from next weekend.

Manager Tony Mowbray made one change to the side that drew with Huddersfield in Rovers' last league game, with Tayo Edun starting in place of the injured Harry Pickering, while Scott Wharton was recalled after missing the FA Cup defeat against Wigan to play his 100th game for Blackburn.

Cardiff boss Steve Morison opted to select new signing Cody Drameh following his loan signing from Leeds United, while Ryan Wintle also made a first start for the club after being recalled from a loan at Blackpool.

The Bluebirds received a boost in the FA Cup with a televised game at Liverpool their reward for beating Preston and they almost got off to a perfect start, but Curtis Nelson headed just wide of the upright from a corner.

Blackburn went in front six minutes later on 14 minutes when Cardiff were caught on their heels as Reda Khadra found Rothwell, who eased forward before curling the ball into the bottom corner of the net from 20-yards.

Set pieces appeared Cardiff's best route to an equaliser, but Aden Flint headed straight at Thomas Kaminski from Joe Ralls' fine delivery. Ralls has assisted five goals in his last seven league games, as many as in his previous 48 combined beforehand.

Cardiff forced Kaminski to save again as Perry Ng struck from just outside the box, but Rovers had a good level of control and John Buckley's shot from 25-yards tested Alex Smithies just before the interval.

Since a 7-0 home defeat to Fulham in November, Blackburn have conceded just three goals in nine Championship matches, the fewest of any side in the entire division in this time and that defensive solidity was evident as Cardiff probed for an equaliser.

Nelson's firm header on 68 minutes forced Kaminski into a save at full stretch as he turned the ball away, but it was Nyambe's red card for a second booking with 14 minutes remaining that gave Cardiff real hope of a leveller.

However, Rovers held firm with some resolute defending as Cardiff were again beaten at home in a bad-tempered affair in which 12 yellow cards were issued.

Marlon Pack (Cardiff City) is shown the yellow card for a bad foul.

Darragh Lenihan (Blackburn Rovers) wins a free kick in the defensive half.

Sam Gallagher (Blackburn Rovers) is shown the yellow card for a bad foul.

Ryan Wintle (Cardiff City) wins a free kick in the attacking half.

Perry Ng (Cardiff City) wins a free kick in the attacking half.