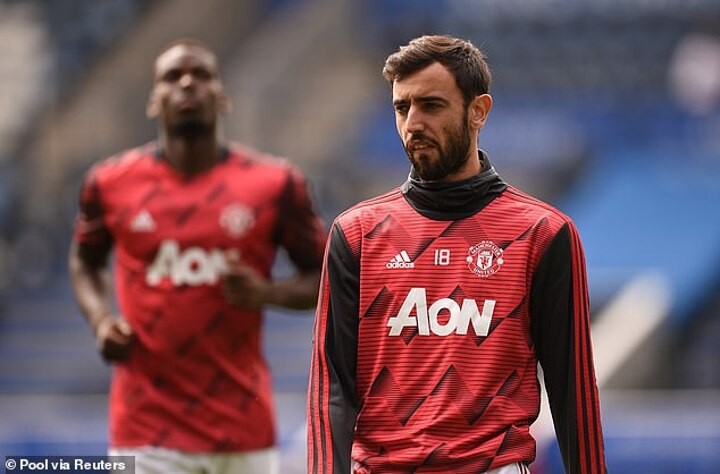 Jamie Carragher has strongly insisted that Paul Pogba and Bruno Fernandes are unable to play in the same team for Manchester United.

The Frenchman was on the bench for United at the weekend, as the Red Devils were held to a goalless draw with a midfield of Fernandes, Fred and Scott McTominay.

With new signing Donny van de Beek on the bench as well as the more defensive Nemanja Matic, it meant United had a £170m worth of midfielders left sat on the bench at Old Trafford.

Carragher said on Monday Night Football that Pogba and Fernandes can't play together and that he 'doesn't understand' the signing of Donny van de Beek.

He said: 'I actually admire (Ole Gunnar) Solskjaer for putting Pogba on the bench.

'I said a few weeks ago after the Crystal Palace game, Fernandes and Pogba is not a midfield that can play together and never will be.

'Van de Beek, I don’t understand the signing, I really don’t get it, how he was ever going to play or where he's going to fit in.

'As soon as he signed I thought he plays number ten, Fernandes plays there, Pogba can play there.

'The problem for me is Paul Pogba, I’ve said it for a long time. I’m with Gary (Neville), Fernandes is the man for that number ten position but I don’t know how Ole can not pick a £90m signing in Pogba, it's difficult for a manager, so at some stage he will get back into the team.'

Co-pundit Neville added that Fernandes has not played as well when in a midfield with Pogba or van de Beek.

However, he insisted it was too early to say Fernandes and Pogba can't play in the same team.

'Ole’s had six months to get Pogba and Fernandes together,' the former Manchester United defender said.

'I don’t think they’ve been in the position where they’ve played together that much so we can write it off already. If United’s results don’t improve with them both in the team then fair enough, but it’s too early.

'Bruno, when he’s with Fred and McTominay, when they play together they haven’t lost a game. I think Ole’s looked at it this week and said let’s get back to basics, I know these three can play together.

'We were a mess pre-international break giving up chances left, right and centre. Beaten 6-1 at home by Tottenham, lost to Crystal Palace who looked comfortable, Brighton away we were fortunate. He’s thought we need to get a foundation and he’s done that with those three players in midfield.'