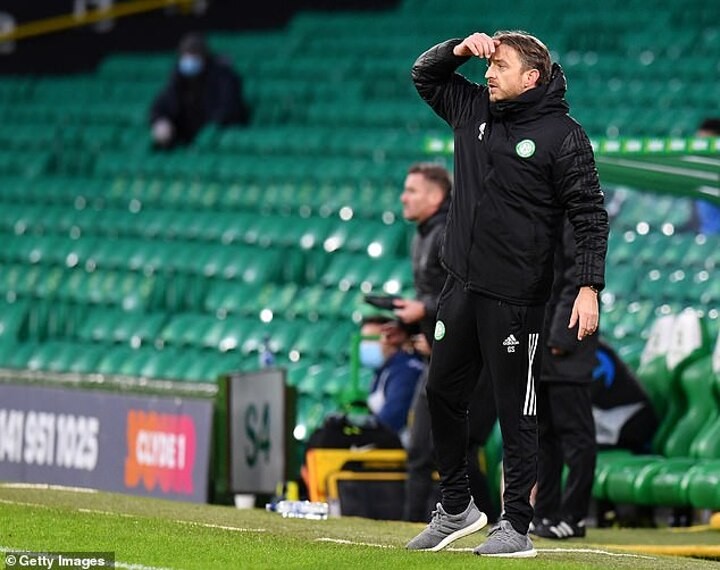 The cost of that senseless trip to Dubai continues to spiral. Another two points shed in an already hopeless pursuit of league leaders Rangers was hardly the surprise of the weekend.

But the demoralising effect of being outplayed on home turf by a team that has never won in the east end of Glasgow may exact a further toll on the fringe players and youngsters cobbled together in this shadow team taken by Gavin Strachan.

With the bulk of the outgoing champions' preferred starting XI still in self-isolation following the positive Covid test returned by Christopher Jullien on arrival back from the Middle East, Strachan was forced to go with largely the same lot that toiled against Hibs on Monday.

Pre-match, Livingston boss David Martindale had a bit of fun by estimating a £60million valuation on that second-string line-up.

Good luck taking that quote to the open market.

Neil Lennon will be back in charge of the first XI in midweek but the bad news is their next assignment is on Livvy's plastic pitch, a surface on which they have toiled even in the best of times.

They're also going into round two against a very decent football team, a fact that should not be overlooked amid the drama surrounding the outgoing champions.

A stunning December run earned Martindale the Premiership's manager of the month award and the Lions' form has continued into the New Year.

Celtic showed two changes to the shadow side sent out to face Hibs on Monday. Nir Bitton, suspended in the wake of his red card in the New Year defeat by Rangers, replaced Stephen Welsh at centre-back while Cameron Harper dropped out in favour of Tony Ralston.

Ralston's inclusion at right-back saw Jeremie Frimpong push on to play wide right while Mikey Johnston moved to the left after a tough shift through the middle.

Given the multitude of issues facing Celtic, the West Lothian team had little to fear and started with the mindset of equals not underdogs.

As a result they clicked into a high-tempo performance of the kind Celtic Park has not really been used to since the turnstiles were padlocked last March.

An early corner yielded a chance for the visitors and there was absolutely nothing wrong with centre-back Jon Guthrie's technique as he met a dropping ball 20 yards out and returned it on the volley.

Conor Hazard was beaten but the shot brushed the side-netting on its way past.

Martindale had wing-backs Nicky Devlin and Steve Lawson under orders to push high and both flashed crosses through the six-yard area before Hazard and his defence had time to settle into into the match.

Celtic's best effort of the game came from captain Callum McGregor who, after hosting a socially distanced mock huddle pre-match, drifted into similar space 20 yards from goal and arrowed a shot that whistled over Max Stryjek's top right-hand corner.

The wriggling persistence of David Turnbull brought the next opportunity via a desperate tackle from Ciaran Brown that disposed the playmaker but played in Frimpong.

But these were slim pickings for the home team. Rogic may not be the most mobile choice to lead the attack but his solid frame and receiving skills ought to have made him a reliable outlet to hold the ball in.

Time and again, however, the Australian internationalist failed to make anything stick. Arguably the most naturally talented player on the pitch, his lack of impact provided a neat summary of his contribution since signing a five-year contract in the summer of 2018.

As impoverished as Celtic's first-half display was, the second 45 was even worse.

Livingston were presented a counter-attacking chance when a Turnbull pass was intercepted. Play quickly turned over to give Scott Robinson a run at goal but although he packed lots into his 20-yard pot shot it flew wide.

Robinson was then inches away from connection as Scott Pittman headed down a fine Mullin cross.

Mullin's delivery was even better from a subsequent corner that gave Efe Ambrose a free header on the edge of the six-yard box but the Nigerian defender's powerfully poor execution let his old club off the hook.

The pressure continued as the excellent Mullin spun and dispatched a shot that clipped the bar on its way over and then Devlin drilled a cross-cum-shot wide.

Every department of the Celtic team was malfunctioning, from Shane Duffy's ragged distribution from the back through the midfield axis of Soro and the over-worked McGregor.

Out wide, Johnston and Frimpong were producing nothing and Rogic was belatedly withdrawn for Armstrong Ojo-Flex with just 10 minutes remaining.

The young sub immediately came closer to scoring than the starting striker but, on the stretch, couldn't connect with Ralston's low cross along the six-yard line.

Should Rangers defeat Motherwell on Sunday, the gap will widen to 23 points. In that context, not even the five-star luxury of Dubai seems so far away.