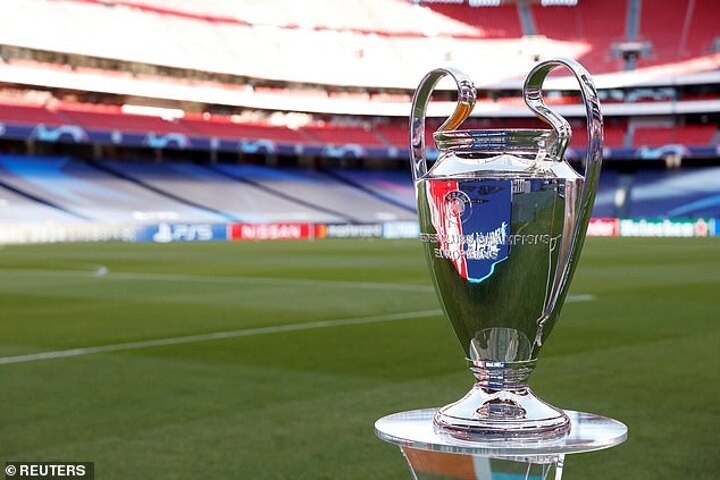 Fans of both Chelsea and Manchester City have called on UEFA to move the Champions League final to England after Turkey was put on the UK Government's 'red list'.

The May 29 final is currently planned to take place in Istanbul's Olympic Stadium but Turkey went into a new three-week full lockdown last week and the UK has responded by placing the country in the highest travel restrictions category.

The government ruling means anyone, including the players themselves, would have to quarantine for 10 days in a hotel upon returning to the UK - which puts England's European Championships preparations under serious threat.

UK Transport Secretary Grant Shapps revealed on Friday that the government and the FA are in talks with UEFA about moving this month's final to England.

And fans from both sides, who were in contention to snap up 8,000 available tickets to the Istanbul final before Friday's ruling by the government, took to social media to try and persuade European football's governing body to bring the final to England.

One City fan tweeted: 'Makes sense on so many levels to move the @UCL final to England. I would be very surprised if @UEFA move it though! #UCL #MCFC'

Another fan of Pep Guardiola's side wants home advantage for the final, saying: 'If the Champions League final is being moved to UK, can it be hosted at the Etihad, please?'

The Chelsea Supporters Trust issued a statement on Friday evening that they are appealing to UEFA to bring the final to the UK.

The group tweeted: 'Turkey has been added to the red list and therefore no #CFC supporters can travel to watch the #UCL final.

'We are meeting with the @UEFA president this week & will request that the fixture is moved to the UK. #ForTheFans'

Another Blues supporter wrote: 'Makes sense with this Covid-19. Better to stage it in England where fans can be allowed into the stadium by the gvt.'

One Chelsea fan also wants the final to be held at the Etihad Stadium, given the Blues' only Champions League triumph to date came when they defeated Bayern Munich in their own stadium in 2012.

The fan claimed: 'I want the CL final to be at the Etihad because we won it in someone’s backyard in 2012.'

Other Blues supporters took the opportunity to poke fun at Arsenal, saying the Emirates Stadium should host the final given the Gunners are not involved in a European final this year.

One fan said: 'Rumors that the CL final venue will be changed from instabul and brought to England. As a chelsea fan would like it to be played in Emirates Stadium so that Arsenal can be involved.'

Another wrote: 'If the Champions League final is going to be moved to England it should be held at the Emirates imo.'

Wembley Stadium is one of the potential UK stadiums being considered for the final, as the north west London ground has hosted two Champions League showpiece events before and will host UEFA's Euro 2020 competition later this summer.

According to Sky Sports News this week, Aston Villa offered their Villa Park ground as a potential venue, though the stadium that has hosted FA Cup semi-finals and the Community Shield in the past does not conform to UEFA regulations.

Another potential UK venue that could host the final is the Tottenham Hotspur Stadium, which was in contention to pick up extra Euro 2020 fixtures after Dublin and Bilbao lost their rights to host in the summer tournament.

Some Tottenham fans have argued that the thought of Chelsea winning the Champions League in their own stadium would be too embarrassing for them.

One Spurs fan said: 'If our stadium is genuinely in the mix for the CL final then (Spurs owner Daniel) Levy is a jokeman. Already knew that though.'

Another tweeted: 'I don’t care about the financial and commercial gain it brings, but if Levy had any ounce of morals left in him he would never let our ground host the CL final. Would be absolutely humiliating for the fans. We’re watching.'

Fans from other football clubs have waded in on the debate, claiming that UEFA should be moving the final to England due to coronavirus health concerns.

One fan said:  'Move it to Wembley, makes too much sense for player/staff safety with all England final. Let as many fully vax’d healthcare workers attend... Safest, most fun evironemnt possible and a way to say thank you to the @NHSuk'

Another wrote: '@UEFA Time to find out if you really are in it for the fans. City & Chelsea to play in a UK Red listed country. Action speaks louder than words. Move the CL Final to England. I’m a Manchester United fan with no attachment to either club

Meanwhile, one fan tweeted: 'Don’t support City or Chelsea but UEFA should change the venue for UCL final to Wembley or another ground in England. Not just to reward the fans for saving their product from the Super league but also from a covid19 safety perspective now Turkey on UK red list.'