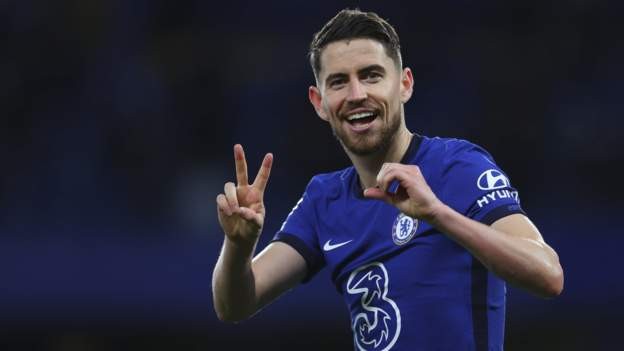 Chelsea beat Leicester City to boost their Champions League hopes - and leave the Foxes in danger of missing out.

Just three days after Leicester beat Chelsea 1-0 in the FA Cup final, Chelsea got some measure of revenge to win thanks to Antonio Rudiger and Jorginho goals in front of 8,000 fans.

Kelechi Iheanacho gave the Foxes hope but they did not create enough chances to deserve anything out of the game.

Chelsea's win takes them up to third place in the table, while Liverpool could knock Leicester down to fifth place if they win at Burnley on Wednesday.

There was no doubt Thomas Tuchel's side deserved their victory as Rudiger bundled home from close range from a corner.

Jorginho put the game beyond doubt with a penalty after Wesley Fofana clipped Timo Werner.

They had been unlucky not to be ahead at the break as Werner had a penalty appeal controversially turned down and two goals disallowed.

Iheanacho's goal after good pressure from Wilfred Ndidi was not enough for Leicester, who now need to score at least three goals against Tottenham Hotspur on the final day or hope for Liverpool to drop points.

There was a late melee, with most of the players and the benches involved too - with Leicester's Ricardo Pereira and unused substitute Daniel Amartey booked.

'Job not done' for Chelsea, but is this deja vu for Leicester?'It's a different game' - fans return but how much do they help?Follow reaction to the game hereChelsea's revenge and Roy's farewell

Chelsea were disappointed to lose Saturday's FA Cup final - a chance for Tuchel to win his first trophy in English football.

The Blues will have another chance to win a trophy - the big one - when they face Manchester City in the Champions League final in 11 days' time.

They boosted their chances of being back in that tournament next season - and know a win at Aston Villa on the final day seals their top-four place.

Chelsea had felt aggrieved by a late 'equaliser' disallowed by VAR on Saturday.

And thousands of fans let their displeasure at VAR be known again as several decisions went against them in the first half at Stamford Bridge.

First Werner was caught by Youri Tielemans in the box, but was somehow penalised himself. There was no VAR review into that one.

Then Werner was clearly offside as he scored from Mason Mount's first-time pass - with no need for VAR.

Werner thought he finally had his goal - and celebrated with the fans - before VAR correctly deemed he had bundled the ball in with his arm and not his head.

Chelsea's frustrations lifted in the second half when Jamie Vardy inadvertently flicked a Ben Chilwell corner into the path of Rudiger, who scored with his thigh.

And then a VAR decision went Chelsea's way when Fofana needlessly fouled Werner, with Jorginho scoring the penalty.

Chelsea did manage to set up a tense finale for themselves by trying to play their way out of defence with Mateo Kovacic losing the ball to Ndidi, who set up Iheanacho, but they held out.

Whatever happens now for Leicester, this is their second most successful season ever (behind the Premier League title-winning season of 2015-16) thanks to winning their first ever FA Cup.

If they do miss out on the top four, that victory will make it easier to take than last season's collapse in the league that also saw them miss out.

But they will be highly frustrated, knowing a win at Stamford Bridge would have guaranteed their place in next season's Champions League.

They need either Burnley or Crystal Palace to deny Liverpool, or to beat Spurs at least 3-0 on the final day (they need even more goals if the Reds win their games by more than one).

They were excellent on Saturday against Chelsea but disappointing in this game.

Iheanacho's introduction after 60 minutes made them look a better team and he gave them hope with a first-time strike, and also forced a save from Edouard Mendy.

That goal gave the Nigerian the unusual distinction of being the first player to score a Premier League goal on all seven days within a single season.

They did have one late chance to level - and it was a big one - as an unmarked Ayoze Perez shot over the bar as the clock ticked 90.

It is the first time where the sides starting the day in the top three of the Premier League all played but did not win since 31 January 2017 (Arsenal, Spurs, Chelsea)Leicester have won just two of their last 30 away league games against Chelsea (D11 L17)Chelsea have scored 10 Premier League goals via corners this season, more than any other team. Only Leeds (11) have conceded more goals in this manner than Leicester (nine)No player has scored more Premier League goals in a single campaign with 100% of them coming from the penalty spot than Jorginho's seven (level with James Milner in 2016-17)Marc Albrighton made his 200th Premier League appearance for Leicester City, becoming only the fourth player to reach this milestone for the club (also Jamie Vardy, Kasper Schmeichel, Muzzy Izzet)

Christian Pulisic (Chelsea) wins a free kick in the defensive half.

Ricardo Pereira (Leicester City) is shown the yellow card for a bad foul.

Ben Chilwell (Chelsea) wins a free kick in the defensive half.

Attempt missed. Ayoze Pérez (Leicester City) right footed shot from the centre of the box is too high. Assisted by Ricardo Pereira with a cross.

Wilfred Ndidi (Leicester City) is shown the yellow card for a bad foul.

Youri Tielemans (Leicester City) wins a free kick in the defensive half.