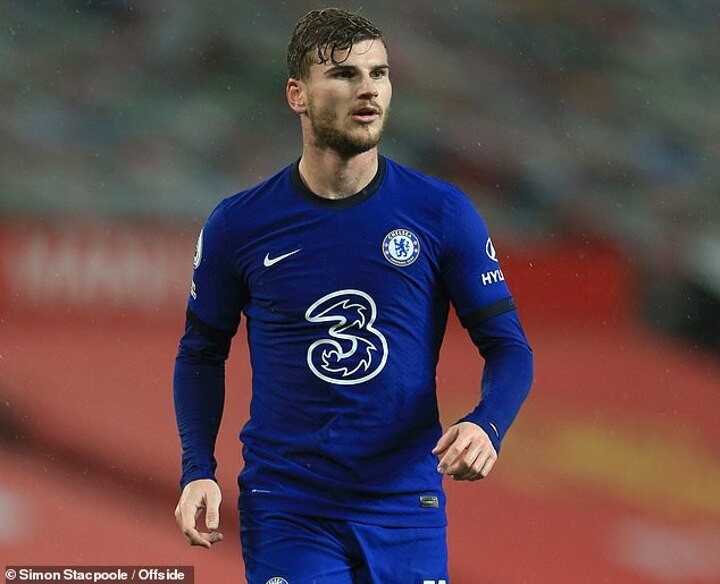 Werner has often found himself isolated as a lone forward and looked frustrated as his side failed to create clear cut chances during their 0-0 draw at Old Trafford on Saturday.

The 24-year-old is yet to hit the devastating form that saw him score 34 goals in all competitions for RB Leipzig last season but Lampard is adamant he has no doubt the striker will soon find his feet.

'I am very happy with Timo,' said the Chelsea boss.

'If you go back to the game before, he scored two goals and Kai Havertz scores a goal. I am least worried about the front end of the pitch with the players that we have there.

'It is normal that it will take some time for relationships - for when we have got to put the ball in behind, the ball into feet - clearly these things are going to take time to build.

'The reason we brought Timo and Kai into the club is to add to the quality we already have here. Hakim Ziyech is looking like he is getting close to starting a game with his fitness.

'I have no worries about that. The last bit didn't happen for us (against United). It is normal, that happens in football, but I am very happy with the players.'

Lampard started Christian Pulisic and Havertz alongside the German at Old Trafford but the front three struggled to create much link-up play in their opponents' half.

Werner's two goals came in the 3-3 draw with Southampton but the striker has failed to find the net in each of the other league games he has played.

The forward was also on the scoresheet in the last-16 of the Carabao Cup against Tottenham but didn't step up to take a penalty in the shoot-out after suffering with cramp.

Chelsea travel to Russia to take on Krasnodar in their second Champions League group game on Wednesday.