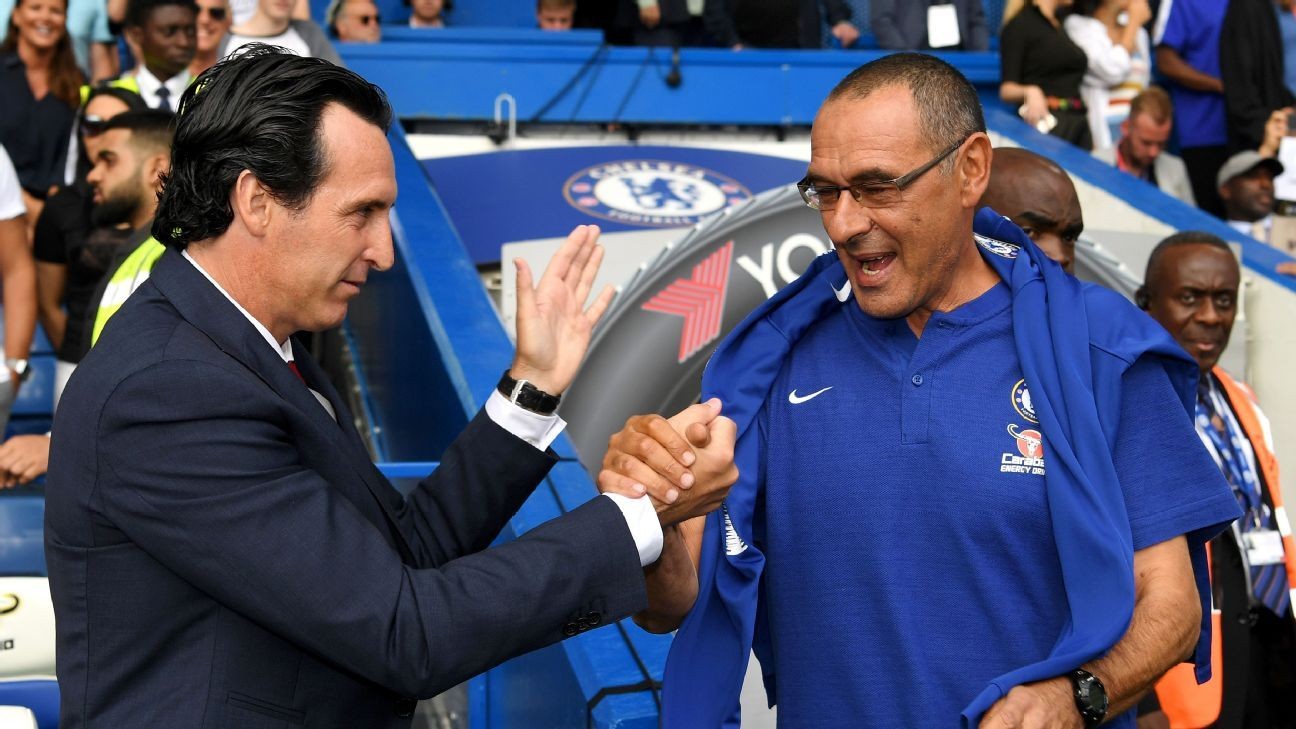 Marcos Alonso scored the winner for Chelsea in a back-and-forth London derby against Arsenal, who paid the price for their missed chances.

Marcos Alonso scored the winner for Chelsea in a back-and-forth London derby against Arsenal, who paid the price for their missed chances.

ESPN FC's Craig Burley breaks down the defensive struggles that plagued both Chelsea and Arsenal in a game littered with goals.

LONDON -- Strip it all back -- the new managers, new systems and the respective ownership issues at Chelsea and Arsenal -- and this season is about one thing and one thing only for both clubs -- getting back into the UEFA Champions League.

Having finished fifth and sixth respectively last season, Chelsea and Arsenal will spend this campaign on the outside, looking in, when the elite contest the Champions League, so Maurizio Sarri has clearly made a better start than Unai Emery in the race to seal a top-four finish this time around.

Chelsea's 3-2 win against Arsenal at Stamford Bridge made it two wins out of two for Sarri since the Italian replaced Antonio Conte as coach this summer.

The former Napoli boss is attempting to impose a new, attacking system on his team after arriving in mid-July, but he could not have made a better start.

As for Emery, after last Sunday's 2-0 loss to Manchester City, he is already playing catch-up, with Arsenal losing their first two leagues games in a season for the first time since 1992-93.

There is too much football still to be played this season for Arsenal to write off their top-four hopes just yet, but the sight of Chelsea and Tottenham pulling six points clear at this early stage, with City, Liverpool and Manchester United also aiming to maintain their 100 percent start on Matchday 2, should be a cause for concern, if not alarm, at the Emirates.

Maybe it is not a bad thing that Emery, the former Sevilla coach, knows how to win the Europa League having done it three times already as a coach.

August is not yet over, but winning the Europa League might just be Arsenal's best hope of qualifying for the Champions League if they allow their top-six rivals to pull further away this month.

Unai Emery and Maurizio Sarri couldn't be off to more different starts in London.

"Calm," Emery said, when asked how he viewed Arsenal's season after their winless start. "We need to give the players calm and continue working.

"I know we need to improve things and push the players to work, but for me, there are many positive things.

"The team competed well today, had chances in the match and the young players are growing up with us."

Perhaps Emery is right to be preaching patience and "calm."

Arsene Wenger's departure at the end of last season may have been long overdue, but it was a shock to Arsenal's system nonetheless and Emery must find a way to quickly breathe new life and inspiration into a team previously coached by one man for over two decades.

Sarri has a different challenge at Chelsea. After all, this is a club that has consistently dispelled the myth that stability is the most crucial ingredient for success.

A banner unfurled by their supporters prior to the game declared "15 years, 15 trophies" -- a reference to the 15 years of Roman Abramovich's ownership -- but Sarri is the 13th full-time manager to have been appointed by the Russian in that time, so change is nothing new at Stamford Bridge.

Sarri's arrival, following Conte's exit, is simply more of the same. The players are accustomed to a new broom sweeping clean, but Sarri is also fortunate to have inherited a stronger, better balanced squad at Chelsea than Emery has found at Arsenal.

But still, it is important to make a positive start at a new job and Sarri has bought himself crucial time by guiding his new team to six points from six in their first two games.

Unai Emery is the first Arsenal manager to lose his first two games since Thomas Mitchell in 1897.

The Italian has cautioned against expecting Chelsea to challenge for the title this season, but a top-four finish is certainly within their reach if they continue to perform as they have done so far.

Better teams than Arsenal will punish Chelsea for their defensive mistakes, though, as Sarri admitted after this game.

"We did very well for 75 minutes but inside that, 15 minutes [when Arsenal scored twice] were horrible.

"It was very, very difficult because we lost the distances between the players and we were unable to cover the lost balls and press like a team, so we were really in trouble."

When you can call Eden Hazard from the substitutes' bench, or replace Alvaro Morata with Olivier Giroud in the closing stages, it is an example of the depth that Sarri has at Chelsea, however.

Emery had quality on the Arsenal bench, but not of the same standard to that enjoyed by Chelsea and he has none of the defensive quality that Sarri possesses.

But Arsenal at least showed some fight in this game, cancelling out Chelsea's 2-0 lead before succumbing to Marcos Alonso's late winner. That in itself will give Emery the right to justifiably say he has added something already as coach.

His team are already off the pace, though, and that will be a worry for him as the season begins to kick into gear.