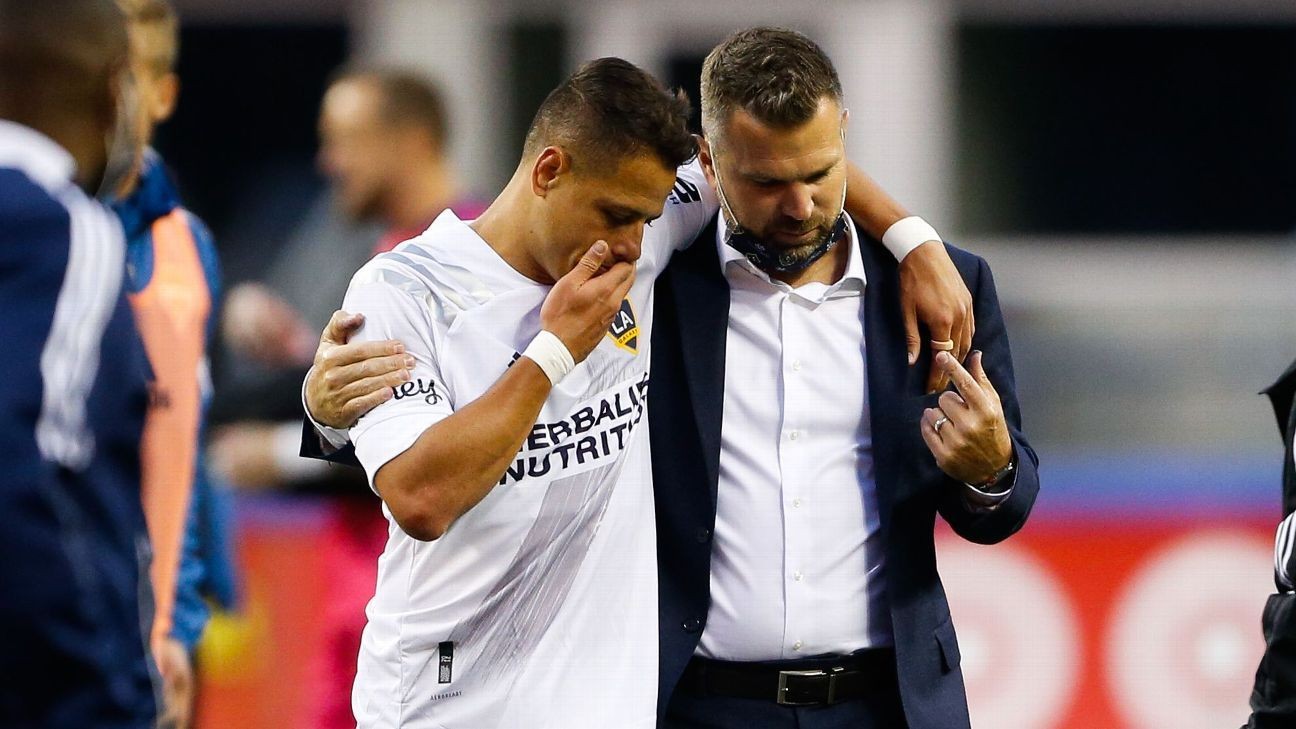 In a year where not a whole lot went right for anyone, even silver linings were hard to find for the LA Galaxy in 2020.

Once Major League Soccer's preeminent power -- and a model for cultural relevancy and on-field success -- the Galaxy missed the playoffs for the third time in four years. Striker Javier "Chicharito" Hernandez, who was acquired last offseason in a $9.4 million transfer after Zlatan Ibrahimovic ended his two-season spell in Southern California, managed just two goals in 12 games. As the club felt added competition from LAFC in the market, the public brand grew stale and when head coach Guillermo Barros Schelotto was fired with three games left in the 2020 season, it was clear a reset was needed.

For general manager Dennis te Kloese, there was no rush to find a replacement. After missing badly on Schelotto, a coach with some success managing in Argentina, a patient approach made sense. Style of play, methodology, ideology, background: it was all up for discussion as a shortlist of candidates was developed. But for all the due diligence that went into the process, there's no substitute for good timing.

"There are times in life when there's the right moment at the right timing for everything," te Kloese said. "Something comes on your path."

And for the Galaxy, that something was a someone: Greg Vanney. During a seven-year stint as the head coach of Toronto FC, the longtime Galaxy defender transformed the club from an afterthought into a perennial MLS Cup contender and as the Galaxy set about finding a new coach, word around the league was that Vanney might soon become available.

"At some point, we saw that Greg was thinking about another opportunity and resigning or not renewing his contract in Toronto," te Kloese said. "He played here. He relates to a lot of people here. He relates to our fan base. He was successful in Toronto and he understands the league ... He was the perfect candidate."

In his farewell news conference from Toronto in December, Vanney described a future scenario that stopped just short of name-checking the Galaxy.

He was introduced as the Galaxy's 10th permanent head coach about a month later.

Despite a reality check in Seattle, Chicharito and the LA Galaxy are off to a promising start. Jennifer Buchanan-USA TODAY Sports

Three games into Vanney's tenure, the Galaxy couldn't have hoped for much more. Chicharito erupted for five combined goals in wins against Inter Miami CF and the New York Red Bulls to start the season and despite a 3-0 loss to the Seattle Sounders FC on Sunday, there is a justified sense of optimism surrounding the club heading into Saturday's El Trafico rivalry game at home against LAFC.

In 10 meetings with LAFC, the Galaxy have won four times -- including twice last season -- while LAFC has won three times, with three draws. It has quickly evolved into one of the best rivalries in the league and is entering a new era with the arrival of Vanney, who goes from coaching Michael Bradley in Toronto to coaching against his father, LAFC manager Bob Bradley.

It's too early too make any worthwhile determinations about what to expect for the rest of the season, but it's apparent Vanney's arrival has had a calming effect on the team.

"He's brought in a lot of clarity, organization," defender Daniel Steres told ESPN. "He knows exactly how he wants to play. He knows the pieces we have here and how they can all fit into that and then how you can adjust to make that better. It's been really clear.

"We're starting to develop a true identity of how we want to play no matter who we're going against."

No one on the team has benefitted more from Vanney's arrival than Chicharito. Mexico's all-time leading goal scorer, who has featured for the likes of Manchester United, Real Madrid and most recently Sevilla FC, arrived in MLS with great fanfare, but amid the coronavirus pandemic, the adjustment was mentally taxing. Following the game in Miami, Chicharito revealed the struggles he has endured since his arrival to L.A.

play0:56Gomez: No one better than Chicharito at finding chances

Herculez Gomez says Javier Hernandez's movement is what sets him apart from other forwards.

"I'm holding my tears," Hernandez told ABC after his two-goal performance in Miami. "I suffered the loss of my grandfather, I would love him to keep watching [me] scoring goals. I'm very touched because, like I told you, last season was very difficult. I miss him so much and these goals are for him, my kids, my whole family, my friends, everyone. I maintain patience, I keep grinding and thankfully things are coming around and hopefully I want to be a part of an unbelievable season."

Since the season-opening match, Chicharito has spoken at length about the importance of mental health, and appears to have settled into a place where he feels comfortable.

"For me what I'm seeking is joy, because what I enjoy is when I grow, and I cannot grow if I don't challenge myself," Hernandez recently told MLSsoccer.com.

"He's an example of the difference between last year and this year," midfielder Sacha Kljestan said. "Other guys can feel it, too -- the mood within the team. The vibes in the team right now are just so much better than last year, so much different than last year. Everyone's excited, everyone's been feeling good. We're feeling like a real family who comes to work every day in order to better ourselves in order to get better as an individual and as a team."

With Chicharito's hot start -- his five goals through three weeks leads the league -- comes renewed expectations for not only how far he can help take the Galaxy, but a possible reintegration into the Mexico national team ahead of a busy international calendar this year. His last international appearance came on Sept. 9, 2019, when he scored in a 3-0 win in a friendly against the United States, and has maintained that he is interested in playing for El Tri. With Wolverhampton Wanderers striker Raul Jimenez still recovering from a scary on-field head injury in November, there could be a need for an established striker like Hernandez in Gerardo "Tata" Martino's Mexico squad this summer.

"There's a few players that I think when they are in good shape always make sense for a national team and Javier is for sure one of them," said te Kloese, who served as the director of national teams for the Mexican Football Federation prior to being named to the Galaxy front office. "He is Mexico's historic goal-scorer and he's still [at 32 years old] where he can still be pretty good for a number of years.

"There are good offensive players for Mexico and he's always one of the players that I think is always mentioned in the offices of the Federation. I can't think why not."

As the Galaxy prepare for a summer that could leave them without multiple players due to international duty, te Kloese said the club is actively searching to add pieces to the roster, but he also pointed to the club's increased emphasis on playing academy products and players who have come through LA Galaxy II in USL as reason to be confident they can weather potential absences.

"I must praise some of our young kids and the work that has gone into the last two-and-a-half years into the academy and in the second team with guys like Efrain Alvarez, Julian Araujo, Cameron Dunbar, Ethan Zubak, Adam Saldana, Carlos Harvey -- the scouting that's gone into getting these people here and now really able to step on the field in a MLS game," he said. "I don't think a club like the Galaxy should only be focused on young players, but it is a luxury to have these young players who can make their mark on the game. Those players will represent value in the future, and they represent value on the field at the moment."

Martinez's long road back to Atlanta after ACL tear: How 2018 MLS MVP got back to the fieldMLS Power Rankings: Seattle soar back to No. 1, New England up to No. 2

In the past, the Galaxy's academy generated a reputation for developing top talent -- at least relative to its MLS peers -- but the pathway for those players to receive significant first-team opportunities hasn't always been there. As MLS becomes more of a player in the global market, the Galaxy's academy-to-first-team pathway figures to become more prominent and one of the players who seems most likely to eventually parlay that into a European transfer is Alvarez.

The 18-year-old attacking midfielder was the youngest signing in USL history when he joined LA Galaxy II at 15 years old in 2017 and debuted for the Mexico national team in a friendly against Costa Rica in March. A native of East Los Angeles, Alvarez was called into Gregg Berhalter's United States national team camp in December, but all signs indicate his long-term international future will be with Mexico.

"I must give him a lot of credit, how hard he worked in the offseason, how fit he is," te Kloese said. "He's an 18-year-old, so sometimes his decisions need to be guided a little bit, needs some backup, needs some people around him that can help him in the right way. But on the field, even as an 18-year-old his vision, his talent and everything -- he does look like an older player and I do think he has a bright future if he wants it."