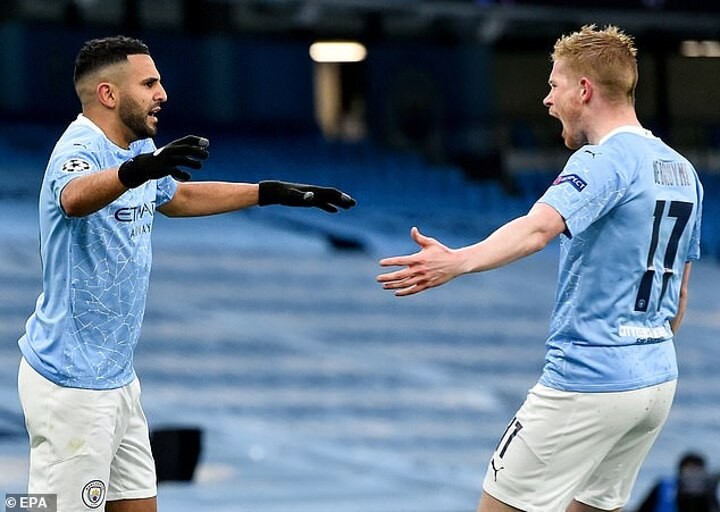 It is the goals that they will remember. Three for Riyad Mahrez over the course of the tie. One for Kevin De Bruyne that started to turn things in Manchester City’s favour in Paris a week earlier.

But this was a victory over two games that was built on something more than those moments.

Facing a really dangerous opponent, Pep Guardiola’s team had to be as disciplined and resilient as perhaps they have ever been.

And one incident early in the second half summed up the collective effort of excellence as well as anything.

As PSG’s Brazilian Neymar ran across the top of the City penalty area, danger threatened. There was space, a clear opening. Had the French champions scored at that point the tie would have been open again.

But Neymar did not score. His shot did not even reach City goalkeeper Ederson. And that was because young City full-back Oleksandr Zinchenko blocked it brilliantly. Had he not done so, Ederson still would not have been required as John Stones was right behind his team-mate ready to do the same.

As the ball disappeared behind for a corner, Stones and Zinchencko celebrated like goal scorers. It was that kind of night for Mauricio Pochettino’s team at the Etihad Stadium. If one City player didn’t get you then another one would.

The whole of City’s back four was magnificent here. Kyle Walker continues to look like a player reborn. The Portuguese centre half Ruben Dias appeared to block at least one shot with his face.

All this from a defensive unit that Guardiola had appeared to suggest was technically limited in the run up to the first game.

This was a night that grew as ugly as the weather as the game approached its latter stages. That was a shame. But by then City’s work had been done. For the second game running between the teams, PSG fell apart in the second half and that was all due to the way City contained and then beat them.

The contrast with the first half in Paris could not have been greater. With mounds of hail sitting beside the pitch following some strange Manchester weather, City were the team that seemed to adapt better to the conditions as well as the enormity of the occasion.

With PSG’s need so great, we expected some fire and brimstone. In their own stadium six days earlier, they threatened to swamp City in the first 45 minutes. Neymar, Angel di Maria and Kylian Mbappe ran hot for half an hour in France and there was always the danger they may find a dangerous groove here.

Most certainly, the fact Mbappe began the night on the bench affected them. The young French forward is so quick and direct that so much of what Pochettino’s team do normally flows from that. He creates space, draws players towards him, frightens people and the result is normally pockets of green for the likes of Neymar to work in behind him.

Robbed of that here, PSG looked a little light early on. They enjoyed possession but it was different to the kind of ball they had in Paris. Here, they were largely contained. They were, if anything, a little predictable and when they lost the ball City were so quick to counter that goals for the home team seemed inevitable.

Before City did lead, only a refereeing error threatened to derail them. How Bjorn Kuipers thought the ball had been handled by Oleksandr Zinchenko in the seventh minute perhaps only he will know. Striking the young full-back on the shoulder, it was nowhere near his arm or hand. Had it not been for a VAR intervention — perhaps the most obvious of the season — City could have been behind on the night. How unjust that would have been.

Beyond that, it was City who carried the threat. Riyad Mahrez’s eleventh minute goal owed as much to goalkeeper Ederson as anything. The Brazilian’s raking pass to set Zinchenko down the left was superb.

Elsewhere, it was another night of influence for Phil Foden. City’s young midfielder has never played better football than he has in recent weeks. Having developed the speed now to ease away from people, he is close to unstoppable when he is in the mood. One touch and dash away from two opponents in centre field midway through the first half was reminiscent of Paul Gascoigne and the longer this season goes on the more impossible it is to imagine he will not be in Gareth Southgate’s starting eleven for the European Championships next month.

The same can be said for John Stones who was imperious at the heart of City’s defence.

The City defender must have begun this season wondering where his next good game was coming from. Now he will play in a Champions League final for the first time.

City were impressive in Paris last week but this was better. This was a complete performance and whoever they face in Istanbul’s final they will start as favourites.