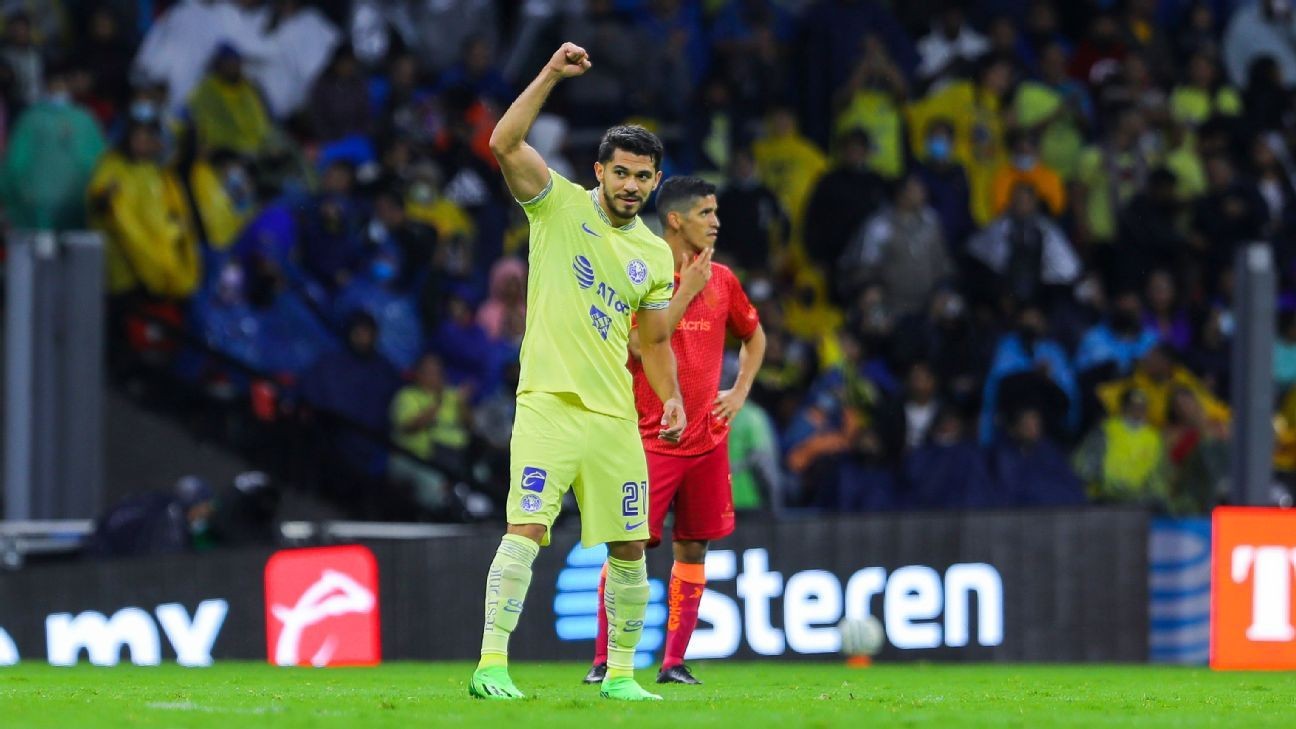 In a busy weekend that included 29 goals over eight games, Liga MX showcased a game-changing brace for Club America, a stunning solo performance from a standout Monterrey midfielder, ongoing issues with league giants Chivas, and more!

In case you missed any of the action, here are three talking points and some additional observations from this weekend's action in Mexico's top flight.

Henry Martin has only made things more difficult for Mexico manager Gerardo "Tata" Martino. With the World Cup coming up, it's become more obvious in recent months that the backup striker spot behind Raul Jimenez has been left to Monterrey's Rogelio Funes Mori, Feyenoord's new signing Santiago Gimenez and Martin.

On Sunday, Martin helped his case with two goals in a 2-1 win for Club America over Juarez, marking the second game in a row that the forward had collected a brace.

"Keep doing my job, keep doing things well on the pitch," said the 29-year-old after thew in "I think that's the most important thing."

If he continues his form, it might be tough to overlook the forward who is prospering with Mexico's most successful club. Counting recent friendlies against Manchester City and Real Madrid, Martin now has six goals in his last five appearances with the Mexico City side.

As for his team, the three points were their first in Liga MX play since last month, moving them up to 14th in the standings with ample room for improvement.

Henry Martin is eyeing a spot on Mexico's squad for the World Cup. Agustin Cuevas/Getty ImagesEnd of the line for Chivas' Cadena?

Things can change quite quickly in Liga MX, and for Chivas manager Ricardo Cadena, he's gone from hero to villain in a matter of just months.

As interim manager, he steered the Guadalajara club to five consecutive victories by May. But Cadena has since suffered without a single win in the start of the new season. Last Friday's 2-1 loss to Mazatlan keeps Chivas without a victory in the Apertura season, leaving them at second-to-last place in the league table.

"I have no excuses. We've had a bad start, a very bad start to the tournament," said a dejected Cadena tafter the loss.

Defensively the team has looked adequate, but it's the attack that has truly held Chivas back. Los Rojiblancos have scored just four times all season -- a league worst -- and constantly look frustrated as they attempt to break down opposing defenses.

As for Cadena, assuming he hasn't been fired just yet, it appears as though this Saturday's Clasico Tapatio match against defending league champions Atlas will be a do-or-die situation for the manager. Another week without a victory will likely be enough to end his tenure with Chivas.

There's no way of finding any faults in Arturo "Ponchito" Gonzalez's performance on Saturday night. With a hat-trick and an assist, the 27-year-old Mexican midfielder propelled Monterrey to an emphatic 5-1 win over Leon.

"I'm left with the feeling of today's teamwork. Some players capitalized on it, in this case, Ponchito," said manager Victor Manuel Vucetich in the post-game news conference.

Gonzalez has been vital to Vucetich's efforts this season, adding in three goals and five assists in his first seven games of the Apertura tournament. While many El Tri fans have been calling for him to have more opportunities with the national team, the midfielder seems to benefit from only having club duties to focus on. In recent years, Gonzalez has become indispensable for the Liga MX side that are now up to second in the league table.

It's no easy feat to shine in a team that is filled with some of the top names in Liga MX, and regardless of what happens ahead of Qatar, Gonzalez appears primed to lead Monterrey to a strong finish in the Apertura.

Liga MX president Mikel Arriola explains why he's worried that Liga MX could fall behind the MLS in competitiveness.

- Elsewhere in Week 7 results: Three late goals in the second half provided Atlas with a 3-1 win over Queretaro, Santos Laguna brushed past Cruz Azul with a dominant 4-0 victory, Toluca moved to the top of the table with a 3-1 result against Club Tijuana, Necaxa sneaked past San Luis a 2-1 away win, and a brace from Nico Ibañez guided Pachuca to a 2-0 victory against Tigres.

- During Sunday's Joan Gamper Trophy match at the Camp Nou, Pumas were humbled by Barcelona in a 6-0 friendly thrashing. Returning to Barcelona for the first time since signing with Pumas, Brazilian defender Dani Alves was honored before the game with a commemorative award and jersey.

- Ajax Amsterdam announced on Friday that they had started a partnership with Pachuca. Both teams will "cooperate in the field of knowledge and talent development" while the Dutch powerhouse will also help with training coaches. Meanwhile, Ajax are also on the verge of signing highly touted defender Jorge Sanchez from Club America.

- The 2022 MLS All-Star Game will kick off this Wednesday night against the league's best taking on Liga MX's All-Stars at Allianz Field in Saint Paul, Minnesota. In last year's first meetup between the two squads in Los Angeles, MLS defeated Liga MX 3-2 on penalties after a 1-1 draw in regulation time. On Tuesday, both squads will also take part in a skills challenge competition.