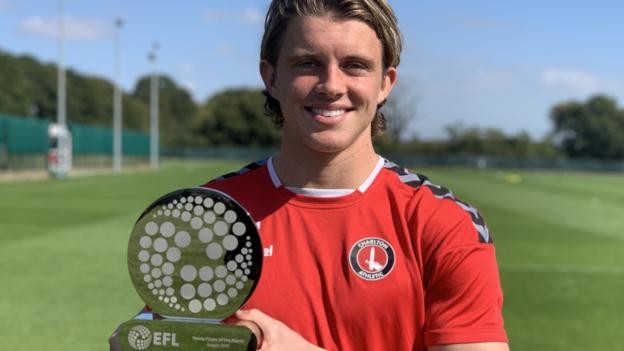 Despite playing fewer than 10 senior games, Conor Gallagher is already a European and world champion.

The 19-year-old was part of the England Under-17 squad which lifted the World Cup in 2017, and was an unused substitute for Chelsea as the Blues beat Arsenal in the Europa League final in Azerbaijan in May.

The midfielder is now making his mark back home in England, impressing in his first loan spell away from Stamford Bridge with Championship side Charlton Athletic.

"I'm buzzing to receive this award," he told BBC Sport.

"It has been a great first month for me at Charlton and I couldn't have asked for more. We are third in the table and I've scored a few goals."

Gallagher was rewarded with a place on the bench in Baku after being named as Chelsea's Academy Player of the Year for 2018-19.

Having played for the Premier League club in the EFL Trophy last season, he is relishing his first taste of senior football.

"I was a little bit nervous at the start but at Chelsea they get us ready for Championship football," he said.

"I felt like I was ready to step up.

"My main aim was to get in the team. After I got the first game out of the way I grew in confidence.

"I think I have shown I am ready to play at this level. Hopefully I can stay in the team and play as much as possible this season."

Charlton boss Lee Bowyer has been impressed with how Gallagher has applied himself since his switch to The Valley, which came after he agreed a new three-year contract with Chelsea.

"To come here having not played senior football before and to do what he has done and embrace the league - because it is a tough league - he has had a great start," said the 42-year-old.

"He is an all-round midfielder. His work-rate is unreal, he puts his foot in for tackles and he can also see a pass.

"Hopefully he keeps going for us, keeps doing the right things and keeps learning and improving. That would be good for us and Chelsea, when he goes back.

"It is his first individual award and I'm sure it won't be his last.

"If he keeps pushing himself and stays lucky with injuries there is no reason why I can't see him getting to the top."

Bowyer started his own playing career at Charlton, making his first-team debut aged 17 in September 1994.

He went on to play for Leeds, West Ham, Newcastle, Birmingham and Ipswich, netting 89 goals from midfield over the course of his career, as well as winning one England cap.

"Lee has given me a lot of tips already," said Gallagher. "He has told me to make the box, which I have done and is why I have got three goals already this season.

"He has given me a lot of information which has helped me perform well."

But there is an even more prolific midfielder who could have a big influence on Gallagher's career.

Lee Bowyer (right), now Charlton manager, tussles with current Chelsea boss Frank Lampard during a match between the Blues and Newcastle in 2006Working with a Blues idol

Gallagher says he was "excited" by the appointment of Frank Lampard as Chelsea manager in July.

The Surrey-born teenager - a Blues fan - grew up idolising the midfielder, who is the club's all-time leading scorer with 211 goals.

"I think it is about time that a manager came in and did that with the Chelsea youngsters," said Gallagher.

"Mason, Tammy and Fikayo have been Chelsea's best players at the start of the season. It shows that if you give more youngsters a chance they can perform.

"I hope one day I can work under Frank, because I think he has a lot to teach me.

"He scored loads of goals and I try to play my game like him, in terms of being box-to-box, scoring goals and making assists. It is how I aspire to be."

Hopes for the play-offs

Charlton suffered their first defeat of the Championship campaign against Birmingham last Saturday, having astounded many pre-season predictions following their promotion from League One via the play-off final in May.

With the Addicks just two points off the top of the table, Gallagher hopes the south-east London club can continue to challenge for a play-off place again this season.

"It will be tough because it is a long season but with how hard the players work, they can achieve that," he said. "I think it helps that we are underdogs.

"No-one really expected us to do well and we were one of the favourites to come bottom or whatever. That helped us in a way to grind out results, and hopefully we can carry on doing that."