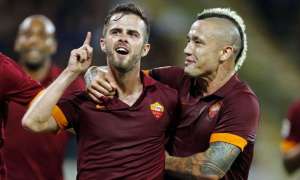 Roma Radja Nainggolan and Miralem Pjanic are reportedly on top of Antonio Conte’s wish-list should he become the new Chelsea’s coach this summer.

The current Italy boss will lead the Azzurri through the European Championships this June, although it has been widely speculated that he will take the Chelsea reins when his Italy contract expires in the summer.

According to Tuttomercatoweb.com, the former Juventus man has already put forward the two Giallorossi midfielders as the ideal additions to the West London side’s squad.

The 26-year-old Bosnian moved to Roma from Lyon in 2011, while Nainggolan joined the Stadio Olimpico side more recently, leaving Cagliari in January 2014.

Both players are proving crucial in coach Luciano Spalletti’s formation, with the Belgian having found his two seasonal goals since the Italian replaced Rudi Garcia. On the other side, Pjanic is enjoying a particularly prolific season, scoring 11 goals in all competitions so far, two since Spalletti took charge.

Chelsea are said to have held positive talks with Conte’s representatives last week, and are aiming to finalise the details of a three-year deal worth around €18 million overall.