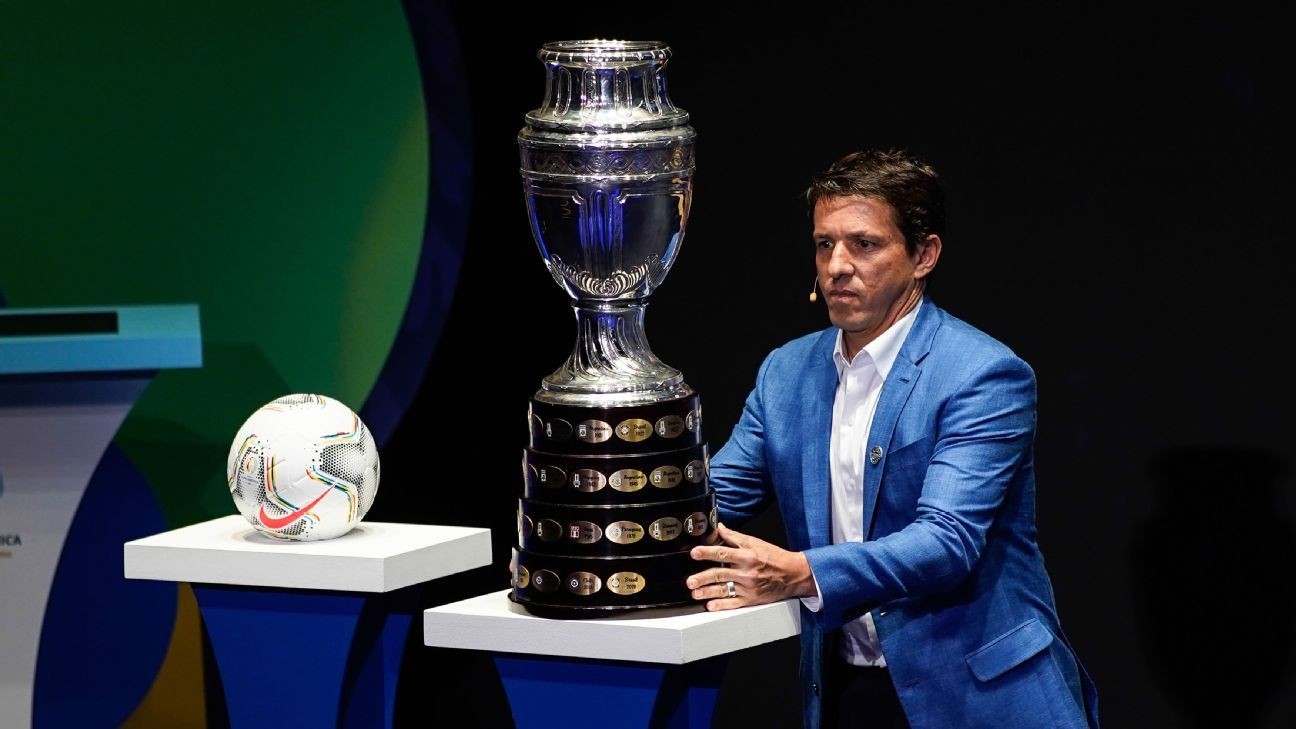 CONMEBOL doesn't want to give up the lucre of a Copa America, but cancelling this year's tournament in order to catch up on World Cup qualifying is the only logical option. Photo by Jhon Paz/Xinhua via Getty

Common sense has prevailed, though it did take a while. After a meeting on Friday concluded without a decision, representatives of FIFA and CONMEBOL -- the ruling bodies of world soccer and South American soccer respectively -- gathered around a virtual table on Saturday and suspended this month's CONMEBOL World Cup qualifiers.

The main sticking point was the situation of the Europe-based players, especially those stars in England, Germany and Italy. In light of the ongoing coronavirus measures, those players would have had to serve a quarantine period on their return from South America -- England's latest "red list" includes every nation on the continent -- meaning that their clubs would have no obligation to release them.

Of the scheduled qualifiers for the end of March, Brazil and Argentina were due to meet as well as Argentina and Uruguay, Colombia and Brazil: decisive matches on the road to the World Cup. The idea that such fixtures could take place without the star players was clearly absurd. CONMEBOL, the South American Confederation, hoped FIFA would be able to intervene, but in the end, suspension was the only option.

Postponing these fixtures might have been necessary even without the participation of players based in Europe. The coronavirus is out of control in Brazil, which is suffering its highest daily death tolls since the pandemic began, with a 30 percent increase in cases over the last 14 days compared to the previous fortnight.

The country's state championships are ongoing, though some states have already called a halt to their tournaments, and a debate is afoot as to whether football should stop nationwide. Before facing Argentina, Brazil were due to visit Colombia, but Colombia's health minister voiced concerns about allowing any plane from Brazil, even a charter flight, into his territory.

All of this invites an obvious question. Why did it take so long to come to a decision to suspend this month's matches? CONMEBOL reportedly did not want to accept FIFA's suggestion to play the matches in a European "bubble," even publishing a game schedule two weeks ago.

Why were they so reluctant to give up the March dates? The answer's easy. In the crowded football calendar, it's difficult to see how to fit in these games. Extra dates have already been organised -- in June, 2021 and January, 2022 -- to make up for the four scheduled rounds that were unable to go ahead last year.

Pablo Escobar was the world's richest, most powerful drug kingpin. Andres Escobar was the biggest soccer star in Colombia. The two were not related, but their fates were inextricably -- and fatally -- intertwined. Stream on ESPN+ (U.S. only).

One idea involves converting a pair of future rounds from "double headers" (two games in a 10-day window) into "triple headers," playing three games in the FIFA dates. This has already happened in Europe during recent international breaks, but the vast distances involved would make it difficult to replicate in South America.

There is one other solution: postpone or scrap the Copa America planned for this June and July, and use the time to catch up on World Cup qualifiers. The Copa has already lost its two invited countries, Australia and Qatar -- CONMEBOL welcomes two teams from outside the continent in order to create a 12-team tournament -- who were forced to pull out precisely because World Cup qualifiers in their confederation, the AFC, were rescheduled for the middle of the year.

And this, after all, is an extra Copa America, one that CONMEBOL slipped in to take advantage of the shift from odd to even years, which looks ludicrous given the fact that the pandemic forced it to be moved back from 2020 to 2021. It is a strange, unwieldy tournament. By rights, the next Copa is due to be staged in Ecuador, yet this one has gone to Argentina and Colombia -- two countries at opposite ends of a large landmass.

From a strictly footballing point of view, the sensible course of action would be to postpone the extra Copa, sacrificing it for the good of World Cup qualification. But the tournament is a money spinner, and CONMEBOL seem very reluctant to give it up, especially given the financial hit of the pandemic.

In the current state of affairs, though, it is impossible for everyone to have all of what they want. Something has to give.