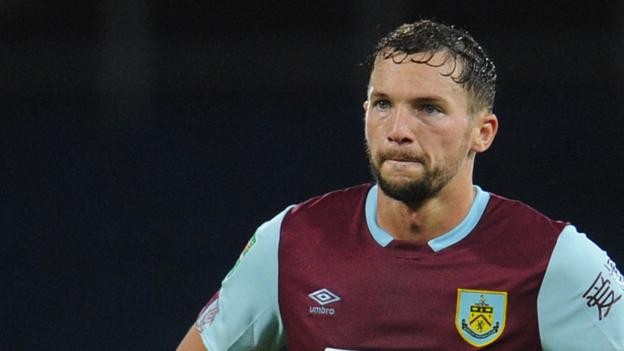 Danny Drinkwater has made one appearance for Burnley this season

Burnley midfielder Danny Drinkwater will be out for two weeks after sustaining ankle ligament damage in a nightclub fight.

The 29-year-old, who is on loan from Chelsea, was reportedly attacked hours after the Clarets' 3-0 defeat by Liverpool on Saturday, 31 August.

Drinkwater is currently unable to train on grass following the incident according to Burnley boss Sean Dyche.

"They are human beings and people do get in scrapes," Dyche said.

"He's old enough and wise enough to know you do whatever you can to try not to get into scrapes but sometimes it happens.

"He is part of us. We have to work with him and help him get realigned to where he was and where he wants to be. We have talked to him and the rest will remain private."

The former Leicester midfielder has been restricted to one appearance this season and was pictured with facial injuries following the incident.

"We've had a chat with him and said, what happened first of all? What was the situation that led to it? OK, let's move away from that, now where to do we go from here? That's where we're at," Dyche added.