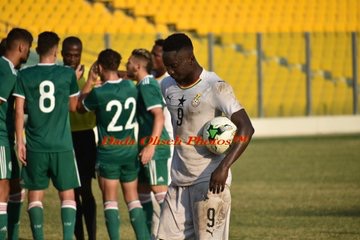 Dauda Mohammed has expressed disappointment over the Black Meteors’ failure to beat Algeria in the first leg of the 2020 CAF U-23 Championship qualifier on Friday.

The Ghana U-23 side were held to a 1-1 draw by the young Foxes in the first leg qualifier at the Accra Sports Stadium on Friday.

However, the Black Meteors leveled from the spot in the second half through RSC Anderlecht forward Dauda Mohammed.

“Not really good results but we still have another more chance to redeem ourselves. It’s going to be hard but not impossible we can still turn it around. Ghana 🇬🇭 #TeamU23,” Mohammed scribbled on his Twitter handle.