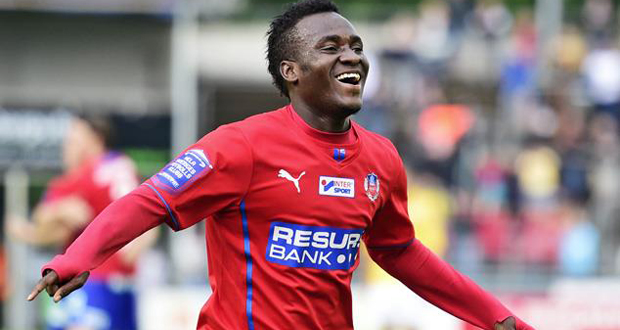 Helsingborg IF star David Accam finally got to make his international debut for Ghana but the Black Stars slipped to a 1-0 loss against Uganda's Cranes in the 2015 AFCON qualifier in Kampala on Saturday afternoon.Â

The 23-year-old stepped onto the pitch in the 67th minute to replace Everton winger Christian Atsu as Ghana slipped to their first defeat in the AFCON rounds.

Spotting the number 12 jersey, the Helsingborg IF player of the season quickly warmed himself into the game and formed a good partnership with petit wing-man Solomon Asante and nearly got the leveller for Ghana.

SavioÂ Kabugo netted the only goal of the game in the 9th minute and the Black Stars were unable to fight back though they remain top of Group E.

Accam, who has been impressive for Helsingborg in the Swedish top-flight had failed to get onto the pitch for Ghana in seven separate call-ups but suspension to Jordan Ayew and injury to Asamoah Gyan meant he would get his chance and when he was finally given the opportunity, he showed off some quality.