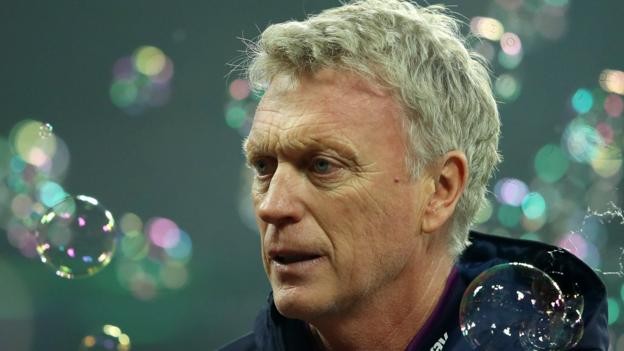 West Ham manager David Moyes says he would like to build "something really special" at the club - if he is given the opportunity to do so.

The Scot, 56, returned for a second spell at London Stadium on 30 December on an 18-month deal following Manuel Pellegrini's dismissal.

"Time in football management is not something we get anymore," said Moyes.

"I hope the owners will see I have a vision of where I want it to go and how I want to transform West Ham."

Speaking to BBC Sport's Football Focus, Moyes added: "I'd like to build a team here and I would like to do something really special. I've had really good encouragement from the owners that they want that to happen as well."

The former Everton and Manchester United boss guided West Ham to safety in 2018 after taking over from Slaven Bilic in November, but departed at the end of the season after six months and 31 games in charge.

After 18 months away from football, his West Ham return began with a 4-0 home league win against Bournemouth on New Year's Day and an FA Cup victory over Gillingham.

However, defeat by Sheffield United last time out left the Hammers 16th and just one point above the bottom three. They now face Moyes' former side Everton on Saturday.

"I was disappointed I didn't stay before, I felt the work we did warranted it, but I understand the owners can decide what they want to do," Moyes said.

"The immediate target is to win the next game. We want everyone to get a feel that this is something for the long term. West Ham is a big club in a big city. There's no reason why in the years to come we can't be the club that is attracting the top players.

Having managed six different clubs over a 22-year span and closing in on 1,000 games as a boss, Moyes insists he would like to get "well over 1,000 if I get the chance".

"I hope in this period of my career I can get it as good as it has been. I think I have a lot to prove and I want to do that."

Watch David Moyes' interview with Leon Osman on Football Focus on BBC One, Saturday at 12:00 GMT.