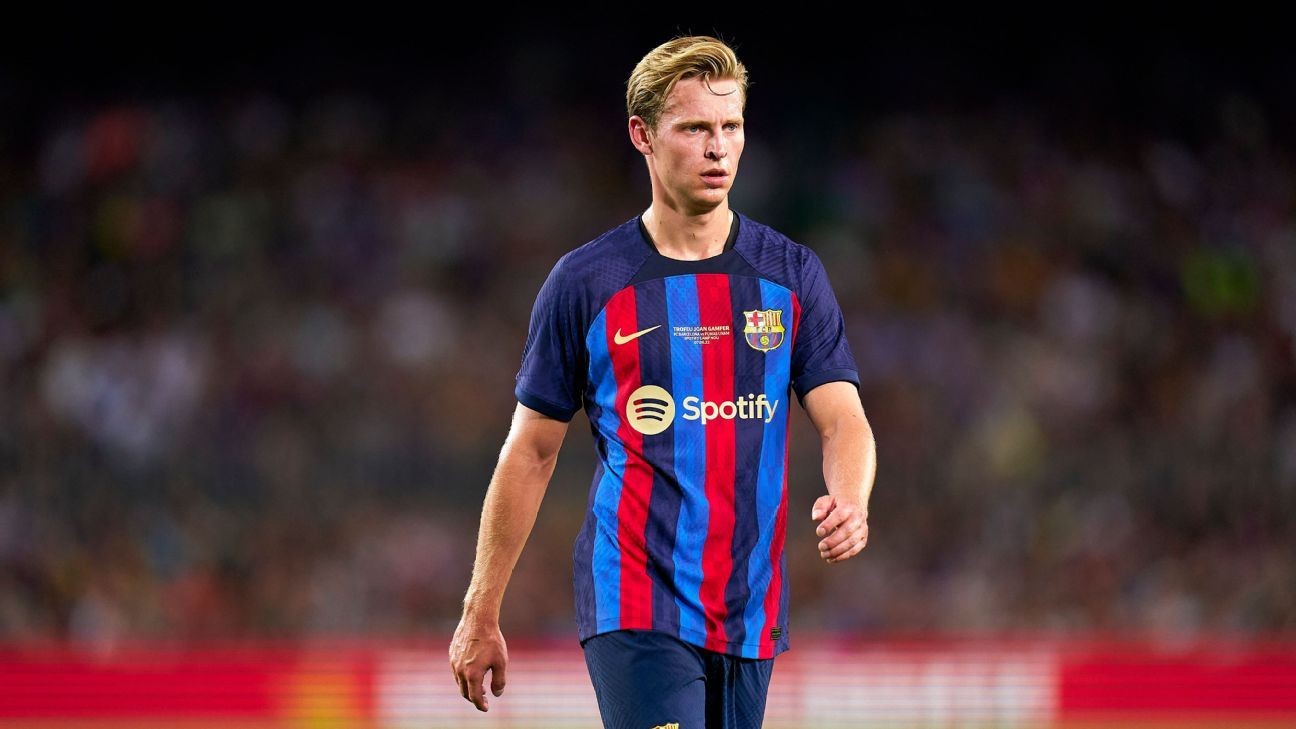 Frenkie de Jong's agents have arrived in Barcelona amid continued uncertainty over the midfielder's future at the club, with Manchester United and Chelsea still pursuing his signing.

Ali Dursun and Hasan Cetinkaya, who also represent Barcelona striker Martin Braithwaite, flew in to the city on Wednesday and are expected to hold talks with the Catalan club in the coming days over both of their clients.

- Why can't Barca register summer signings yet?
- The impact of Messi's exit a year on
- Don't have ESPN? Get instant access

De Jong's future has been the subject of much attention throughout the summer. ESPN revealed in July that Barca had agreed a fee of around €85 million with United, including add-ons, while Chelsea are also interested.

However, the player has so far preferred to remain at Camp Nou.

Barca, meanwhile, have told De Jong that if he wants to stay he must reduce his salary, although sources have told ESPN he is reluctant to do so at this stage.

Sources confirmed to ESPN earlier this week that Barca sent a letter to De Jong's camp in July warning that the contract renewal he signed in 2020 under the previous board had alleged irregularities.

Sources close to the player said the contract is legal and claim the letter that Barca sent was intended to put pressure on De Jong to either accept a move away or agree a wage reduction.

Barca's board believe there were possible irregularities in other renewals signed at the same time by Marc-Andre ter Stegen, Gerard Pique and Clement Lenglet.

However, the timing of Barca's tactics has drawn questions as they try to raise funds and reduce their wage bill to be able to register their summer signings.

Despite that, De Jong remains happy in Barcelona with his girlfriend and scored in Sunday's 6-0 friendly win over Mexican side Pumas UNAM at Camp Nou.

Frenkie de Jong has been told he must reduce his salary if he wants to stay at Barcelona. Pedro Salado/Quality Sport Images/Getty Images

Dursun and Cetinkaya also represent Braithwaite, who has been told by Barca to find a new club. The Denmark striker was left out of the squad for the tour of the United States last month and has not featured in preseason.

Braithwaite, 31, was even jeered by Barca supporters before Sunday's game against Pumas. Sources have told ESPN he is open to leaving the club, who he joined as an emergency signing from Leganes for €20m in 2020, but only if the offer is right for him.

Both players, along with Jordi Alba, agreed pay cuts last summer to enable Memphis Depay, Eric Garcia and Sergio Aguero to be registered, and they may have to do the same this year.

With Barca set to kick off the new LaLiga season on Saturday against Rayo Vallecano, none of their five signings have been registered with the Spanish league, nor have the new contracts signed by Ousmane Dembele and Sergi Roberto.

The club have so far sold assets worth over €600m and are now in a position to register some of their signings. However, a league source told ESPN more money must be raised -- or wages cut -- before Saturday to register everyone.