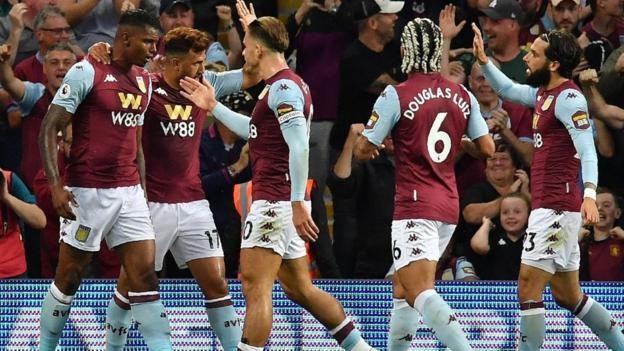 Aston Villa showed their "togetherness" in picking up their first Premier League points of the season by beating Everton, says manager Dean Smith.

Villa finished bottom in 2015-16 and spent three years in the Championship before earning promotion in 2018-19.

They had started this season with back-to-back defeats against Tottenham and Bournemouth before Friday's 2-0 win.

"It has been six months of hard work and a group of players who are working hard for the shirt," said Smith.

Club record signing Wesley, bought from Bruges for £22m in the summer, and Anwar El Ghazi scored the goals at Villa Park for the home side's first triumph in the top flight since February 2016.

Former Brentford boss Smith said: "We are in the Premier League after a 10-match winning run in the Championship and winning in the play-off final. There is a togetherness with all off us and the noise is great to hear.

"I am more pleased to get the first points in the Premier League. Our performances have been OK, Tottenham was tough first up and we were good for an hour.

"We played well against Bournemouth and from the supporters there is a lot of optimism. They stuck right behind us.

"I don't think there is any extra expectations from the supporters. We have a really good bond."

Lack of goals a 'concern' for Silva

Everton came into the game on the back of a draw at Crystal Palace and victory over Watford without conceding a goal.

They were the better side until Villa's opener but have now scored just one goal in their opening three games.

"It is really difficult to see how we can lose this game when we create so many chances to score," Everton boss Marco Silva said.

"We started well and controlled the game with some dangerous moments around their box. The first time they went in our box they scored.

"In the second half it was more with our team in the middle and them with nine players around the box. Even then we created chances to change the result for us. We had the shot off the post and the clear chances with Theo and Lucas [Digne].

"In my opinion we should achieve more in this game. The most difficult thing is to create and when you do you have to put the ball in the net.

"It is concerning about the goals we didn't score and of course we should score more. Against Palace we created lots of chances to score and didn't and again today."