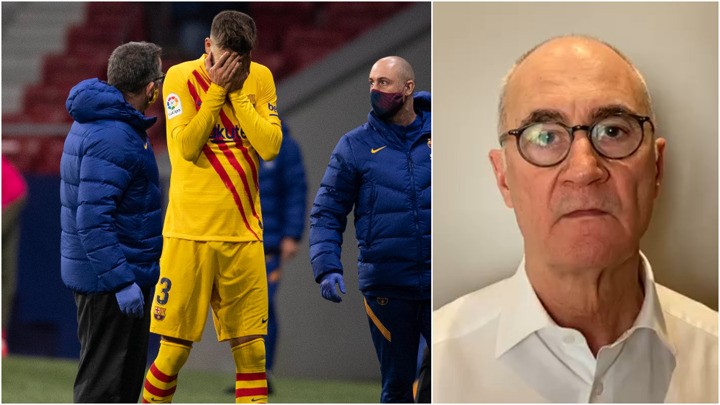 Gerard Pique faces a significant period on the sidelines after suffering two injuries in his right knee during Barcelona's 1-0 loss at Atletico Madrid on Saturday night and could even face a full half a year out.

Doctor Pedro Luis Ripoll has analysed the centre-back's injuries and has explained that the recovery time will depend on whether or not there is a need to reconstruct the anterior cruciate ligament.

"The injury to Gerard Pique is a significant injury," the doctor at the Ripoll y de Prado Sport Clinic explained in a video for MARCA.

"There's two key parts to it, one is the almost full tear of the internal lateral ligament and the other is the seemingly partial tear of the anterior cruciate ligament.

"With the first, it can be treated orthopaedically, but the other one has a worse diagnosis in that sense.

"His return to action depends on whether or not there's a need to reconstruct the anterior cruciate ligament.

"If the injury means there's no solidity in the knee and that there's a need to rebuild it then we'd be talking about a period of around six or eight months out.

"If, on the other hand, that doesn't need done or it's limited to the internal lateral ligament then we could be talking about approximately three and a half months."