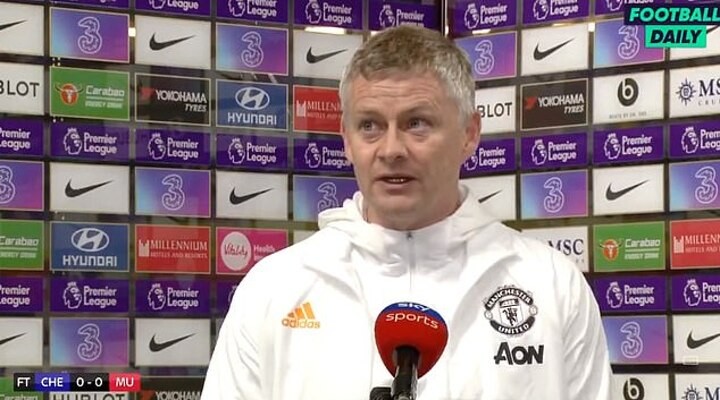 What is it with Manchester United, penalties and conspiracy theories?

For years they were a club with a reputation for being given preferential treatment by referees inside the box.

Now they're complaining about being unfairly denied penalties because of 'outside influences'.

First it was Jurgen Klopp, who now rather famously claimed that United 'had more penalties in two years than I had in five-and-a-half years'.

That was not strictly true. At the time of Klopp's comments, Liverpool had been awarded 30 penalties in 199 Premier League games overseen by the German since he took over in October 2015.

United, under Ole Gunnar Solskjaer, had been awarded 27 in his 75 matches since he came in first as a caretaker manager in December 2018.

If at first it seemed like sour grapes from Klopp, Solskjaer was quick to accuse his counterpart of having a more sinister plot, by claiming his intention was to influence referees.

When United saw a penalty decision overturned by VAR during their frustrating draw with West Brom last month, club captain Harry Maguire too suggested that Klopp's words had started to have a profound affect on referee's decisions during their games.

In a thinly-veiled dig aimed at Klopp, Maguire said:  'Ever since people from other teams have spoken about us we've had nothing, absolutely nothing.

It is always easier to point the finger at someone else for your misfortunes, but do Maguire, Solskjaer and United have a point?

Before Klopp's penalty rant, United had been awarded 11 spot kicks in 25 matches.

Since then, they've had just two from 16 games. Coincidence? Probably.

There's no denying that United have not had the rub of the green in recent weeks but Solskjaer remains convinced that it has contributed to decisions going against his side.

He was dumbfounded at the weekend when United were denied what he felt was a clear penalty during Sunday's 0-0 draw at Chelsea, which saw them drop more vital points in the race for the title.

The ball appeared to strike Callum Hudson-Odoi's hand in the box when he went up for a challenge with Mason Greenwood but referee Stuart Attwell failed to point to the spot.

Attwell was called to the monitor and VAR recommended he award a spot-kick but he stuck with his gut, infuriating Solskjaer and leaving many viewers baffled.

Even Sportsmail columnist Mark Clattenburg admitted it was a mystery that a penalty was not awarded as 'Hudson-Odoi's arm was up in an unnatural position and the ball clearly hit his hand.'

An angry Solskjaer hit out at Chelsea's 'cheeky' pre-match comments about Harry Maguire after they put up an article which claimed the defender had previously 'survived VAR reviews' in recent clashes with the club and bemoaned 'outside influences' for costing them crucial decisions.

'From here you can see it’s handball, they’re shouting handball against our player. It’s taken two points away from us,' Solskjaer said.

'I can’t say, because that’s not going to be good for him. I didn’t say it, I don’t want to cause controversy. It’s not right is it. It’s all this outside influences, VAR talk before the game on Harry, cheeky when they put that on the website. That’s influencing referees.

'You can read what they’re saying about Harry Maguire and putting pressure on referees to give penalties against us. We’ve seen there was a manager, was it Frank, that started it. Loads of talk about us getting penalties when there’s no doubt, and of course today we should’ve had a penalty.'

United may have fallen victim to a contentious decision at the weekend but even Solskjaer admitted his side ultimately didn't create enough to deserve victory on the day.

So, to say it 'cost us two points', is more of a hypothesis than anything else. Because who's to say if United got the penalty and scored it, that Chelsea wouldn't have chucked bodies up front and equalised?

And while it is understandable to feel aggrieved from that particular decision at Chelsea, their other penalty shouts in recent months have been far more ambiguous.

Penalties have certainly dried up for United, but it's hardly the sob story they've tried to make out, considering if those at Chelsea and West Brom were given, they would've had the joint-most spot kicks in the Premier League this season.

As it goes they've won 8 rather than 10 - that's still the joint-second highest number of penalties in the league - so United can't feel too sorry for themselves, even if they are under the impression that everyone else is conspiring against them.