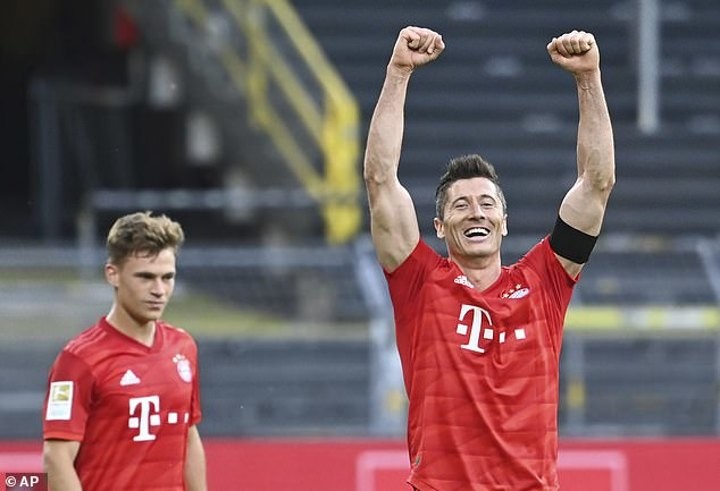 The problem with the great rivalry in German football is that it isn't really a rivalry. Borussia Dortmund are no longer Bayern Munich's rivals. They're an occasional nuisance.

For much of the first half here, they appeared dangerous. And then Munich scored and never looked back. The game was over — quite possibly the league, too.

From a selfish, English, point of view, it was a pity. Victory for Dortmund would have set up the closest Bundesliga title race in years. Instead, another procession is passing by. Munich have seven consecutive titles in hand and are now seven points clear and closing on the eighth.

In that time they have played Dortmund 16 times in the league and lost three. Another three games have been drawn, making it 10 wins for Munich in their league meetings since 2012-13.

Dortmund are to Munich what Vitas Gerulaitas was to tennis great Jimmy Connors. Gerulaitas finally won after a run of 16 straight defeats. 'Nobody beats Vitas Gerulaitas 17 times in a row,' he announced proudly afterwards.

Still, as disappointing as this may have been for those looking for summer diversions, at least the goal that won it was memorable.

It came two minutes before half-time as Munich grew into the game. Dortmund had a chance cleared off the line after just 34 seconds, but Munich were keeping them increasingly at arm's length and were starting to probe.

Dortmund couldn't clear, maybe didn't commit enough, and paid a heavy price. The ball fell to Joshua Kimmich, on his right foot, a yard outside the penalty area. He glanced up and noted goalkeeper Roman Burki in a poor position.

Not far enough back to guard the line and in no position to influence play or gather. He chipped him. The Germans prefer to call it a lob. Either way, it was exquisite.

Burki went scuttling back and got a big hand to it, but not enough. He could have done better, all round really. Still, take nothing away from Kimmich.

This is a defensive midfield player, remember. He was tipped as a centre half early in his career, and then Pep Guardiola converted him to full back.

So he is one of those lovely, versatile, intelligent German footballers. Whatever way you want to play it, he'll play it. It was certainly a goal that deserved to win a match. Now it looks to have won the league.

Yet here's the funny thing. The most hated club in German football are RB Lepizig. New money offends the sensibilities of German traditionalists and they are often the target of protests from fans.

Yet Kimmich initially made his reputation at Leipzig. He played for them in the third tier, then the second. At the time there was no way the club could resist Munich's money, however. Now there is. And that's a bad thing? Doesn't German football want competition? Is it healthy that Munich are winning every season now and plundering their rivals for talent?

One of the attractions of Germany's league being the only game in town right now is to bring it to a wider, captive audience. It does poorly abroad because it is seen as a one-horse race.

Dortmund-Munich is branded Der Klassiker, but what is classic about a fixture in which the last three league games have an aggregate scoreline of 10-0 and two of the last three seasons have ended with one team doing the double?

It could have been different had Dortmund taken early chances on Tuesday. From their first attack, Manuel Neuer was forced to tear from goal to thwart Thorgan Hazard, before Erling Haaland collected the loose ball and Jerome Boateng cleared it off the line.

Boateng — outstanding throughout — also kept Haaland at bay after Hazard cut one back to him on 10 minutes. Yet Munich grew stronger with less to lose. Content to contain at first — a draw would have been a good result for them, too — they came into it through Kingsley Coman and could have gone ahead when he found Serge Gnabry on 19 minutes. Dortmund captain Lukasz Piszczek kept them in it.

Did the absence of a crowd change the dynamic? Obviously it is an advantage for Dortmund to play in front of the famed yellow wall. Yet Munich have won there in 2020, 2017, 2016, 2015 and 2013. It's hardly a fortress where these teams are concerned.

Perhaps the one time a big noise would have made a difference was in the 58th minute when Hazard again found Haaland and his miskick took a deflection off Boateng, who was sprawled on the floor.

Replays showed it may have hit his upper arm. Yet, without spectators to take up the cause, there was no appeal from the players and no pressure on the referee to refer his decision to VAR. It passed with barely a flicker of emotion.

Jadon Sancho came on as a half-time substitute and sparkled in fleeting moments. Yet the optimistic prospect of having him back was balanced for Dortmund by an injury to Haaland, sustained as he stretched for a Sancho cross, which saw him replaced instantly.

Whatever the injury bulletins, the chance to influence the title race is fast disappearing. On the final whistle, the loudest noise was the triumphant scream of match-winner Kimmich. With four Bundesliga titles to his name already, one imagines he knows how it goes from here.