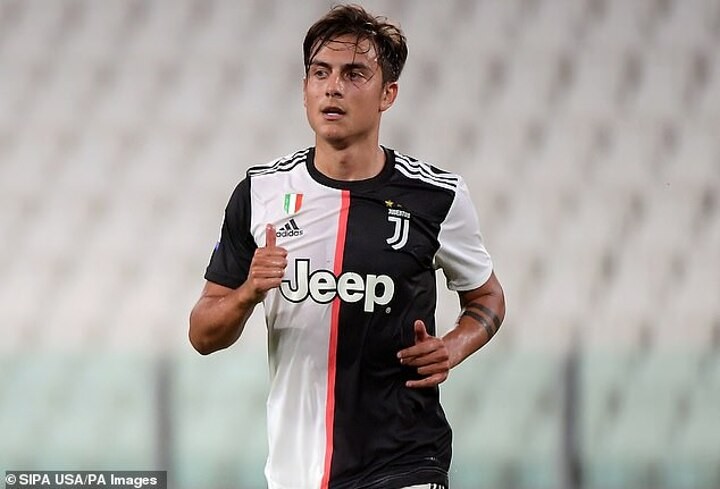 Juventus star Paulo Dybala reportedly had an altercation with club chief Fabio Paratici in the tunnel on Saturday after being left out of Andrea Pirlo's starting XI.

The Argentinean playmaker is yet to feature for the Old Lady this season, with Pirlo favouring to play youngsters Manolo Portanova and Dejan Kulusevski yesterday.

The reigning Serie A champions dropped two points in a shock 1-1 draw at newly-promoted Crotone and although Dybala was named in the matchday squad, he once again failed to appear from the bench.

And Italian outlet Tuttosport state that Dybala did not take the manager's decision well and made his feelings known to Juventus CEO Paratici.

The 26-year-old has not played in any of Juventus' four Serie A games thus far, which have resulted in two wins and two draws.

Ahead of the game, Pirlo said of Dybala's potential involvement: 'He trained yesterday for ten minutes, it wasn't the ideal match.'

Dybala had just returned from international duty with Argentina, but will be firmly in contention this week as Juve get their Champions League campaign underway against Dynamo Kiev.

Meanwhile, an angry Pirlo branded his team 'young' and 'naive' after they were held on Saturday.

Pirlo warned his players that they need to show a better level of maturity after letting their standards slip and receiving a red card for the second time in three league matches.

Summer signing Federico Chiesa was given a straight red on his debut for a studs-up challenge on Luca Cigarini in the second-half.

'Unfortunately, we went down to 10 men in the last two games because of our errors, but we are a young team that needs to work and there hasn't been much time for that with so many internationals,' he told DAZN.

'Young players need to gain experience by playing in matches and it can happen that they make naive errors as part of the learning process.

'We built a team with quality, but it is still a work in progress and needs time. The lads will learn through mistakes, unfortunately that also means taking a few risks in the early matches of the season.

'We made a few mistakes in the timing of the press, but as I said, these things happen when we're still getting the machine oiled. We only really spent half-an-hour on this tactical movement in training yesterday, so it will improve.'