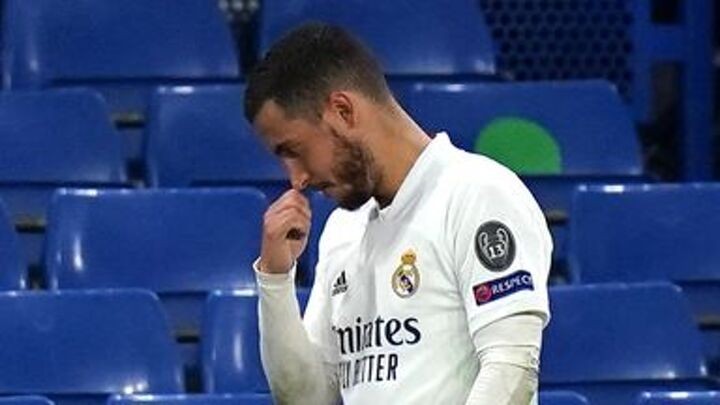 Eden Hazard "owes" Real Madrid and the club's fans after he was seeing laughing with Chelsea players after being knocked out of the Champions League, says Spanish football expert Terry Gibson.

Real crashed out of the semi-final 3-1 on aggregate after losing 2-0 on the night at Stamford Bridge.

The former Chelsea midfielder had been ineffective for the Spanish giants during the game and was taken off a minute from the end.

But that did not stop him appearing to share jokes with the Chelsea players following the final whistle.

Hazard's actions have prompted widespread criticism and led to calls from some Real fans for him to be transferred.

Gibson, who has played for Manchester United and Tottenham, says he acted naively but is not sure where Hazard could go next.

"The first thing is to who? Who's got the money and who would buy him after two years ravaged by injury? So I think that's the big problem but I can understand the frustrations of the Real Madrid fans," Gibson told Sky Sports News.

"I think he was an easy target last night anyway because his form at Real Madrid has been disastrous and the way that he's been injured for the last couple of seasons.

"When he's played he hasn't been effective so he was always going to be an easy target, he hasn't adhered himself to the Real Madrid fans.

"I can understand that as well, losing a Champions League semi-final, not that I would know, but being involved in semi-finals myself, if you were to lose you should be devastated.

"For him to have been as happy as he was after the final whistle with former teammates! It's fine but if you want to congratulate them perhaps it's best done behind the scenes but to do it in full view of the media, the cameras, which everybody in the world can then see.

"You can understand the frustration of the Real Madrid supporters and the club.

"I would imagine the club wouldn't look too kindly on the way he behaved after the final whistle so that hasn't helped him.

"He should be doing everything in his power to make sure that he can get back into some sort of favour with the Real Madrid fans.

"It's not often I say it but I do think Hazard does owe Real Madrid, does owe the Real Madrid supporters, and that wasn't a good look after the game last night.

"He's a nice guy, maybe a little bit naïve in the circumstances last night, but a handshake and a pat on the back and maybe a hug would have been sufficient.

"But for him to go as happy as he did, he was almost celebrating as if he was part of the Chelsea squad, it was foolish."