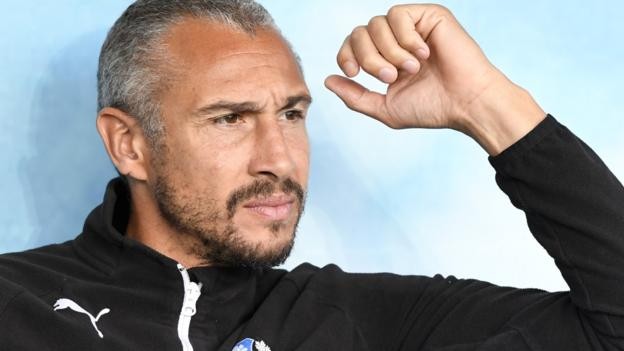 Another Saturday, another eventful day in the English Football League.

The latest chapter of the Leeds United-Derby County story ended with the Rams scoring a late equaliser to draw 1-1 at Elland Road.

Off the pitch, England cricketer Jack Leach at Ashton Gate for Bristol City's draw with Swansea, who were unable to take advantage of Leeds' slip-up to go top of the Championship.

There were interested spectators at other EFL games too, not least at MK Dons, where Celtic legend Henrik Larsson watched Southend get their first League One win of the season.

Larsson has been linked with the manager's job at Southend - more on that to come, as well as some of the other stories you may have missed from Saturday's EFL games.

Are Southend about to land Larsson?

Is the hot seat at Roots Hall about to be filled by a former Celtic, Barcelona and Sweden striker?

Larsson was in the stands to see Southend keep their first clean sheet since January and record their first League One win of the season at MK Dons thanks to Charlie Kelman's early goal.

The 48-year-old, who also had a loan spell at Manchester United in 2007, was pictured sitting alongside Southend chairman Ron Martin at Stadium MK.

Larsson quit as manager of Helsingborgs last month after a brief second spell in charge and is understood to be in the frame for the Southend job, as well as caretaker manager Gary Waddock.

"It's out of my hands and in the chairman's," Waddock told BBC Essex.

"I've said from day one that he'll make the decision that he thinks is right for the football club and I'll respect that whatever decision it is and I'll continue my work accordingly."

Michael Appleton was named the new manager at League One club Lincoln City on Friday and, although he was not in the dugout for Saturday's visit of his former club Oxford, he was probably excited to see he would be up against some familiar faces.

But any warm, fuzzy feelings towards his former colleagues on his first day of term probably vanished within five minutes of kick-off when Tariqe Fosu put Oxford 1-0 up.

Fosu would go on to score a hat-trick and Oxford would hit six without reply to give their former boss a fair few things to think about for the months ahead.

"It was a great win and a great statement to come here and win 6-0," Fosu told BBC Radio Oxford. "The hat-trick is a great bonus as well and I'm absolutely over the moon."

Appleton watched from the stands at Sincil Bank, with Jamie McCombe continuing as the Imps' caretaker manager in the dugout, and he had little to say afterwards about what he had seen on the pitch.

"I don't really want to comment on the players," McCombe told BBC Radio Lincolnshire. "The only positive thing I've got to say is about the fans.

"I was embarrassed on the side as they were singing our names and stuck with us to the end. We didn't deserve them today.

"We have to look at ourselves and I will also today, but we were significantly below par."

As the old saying almost goes, you wait 19 months for a bus in Wigan and then three come at once.

Until 14 September, Chey Dunkley had not scored for Wigan since April 2018, enduring a 48-match dry spell.

But having helped the Latics earn a point with their opening goal at Hull last time out, the 27-year-old centre-back struck twice in Saturday's 2-0 win over Charlton.

That match-winning double makes him Wigan's top scorer this term, having scored more than a third of their eight league goals.

Wigan's unlikely hero gave them their first win since the opening weekend of the season, ending their seven-game winless streak in all competitions.

If you were at Prenton Park on Saturday afternoon and you left early, you missed quite a finale.

Tranmere were trailing 1-0 to Burton as they entered the second minute of additional time, but Ollie Banks' free-kick and Stefan Payne's even later header gave them a dramatic 2-1 win.

Payne's winner was assisted by debutant Neil Danns, after the 36-year-old former Bury captain joined Rovers on a deal until the end of the season on Thursday, after the Shakers' expulsion from the EFL.

There was more late drama at Bolton, where the hosts were just moments away from recording their first win since March.

Leading Sunderland 1-0, League One's bottom side conceded a penalty through substitute Yoan Zouma's handball and Aiden McGeady equalised for the Black Cats in the second minute of added time.

That extended Bolton's 175-day wait for a victory, as their point moved them 15 points below 20th-placed Portsmouth.

Unlikely contenders on the charge in League Two

League Two appeared to be a fairly open division at the start of the season and, with every team now having played 10 matches, that view appears to be a correct one.

Crewe, Cheltenham and Swindon were all mid-table finishers in 2018-19 but they are the three clubs putting pressure on leaders Exeter.

The Alex are second after beating Salford 4-1, coming from behind to win a match for the fourth time in the league this term.

Manager David Artell told BBC Radio Stoke: "This time last year, we were struggling to score and if we conceded the first goal it was terminal. We didn't have the ability to come from behind.

"This year, we've done it plenty already. I don't want to go behind, but that character is another string to the bow that you need to have as a footballer."

Cheltenham are third after winning 2-0 at pre-season favourites Plymouth on Saturday.

"I thought we were a bit flaky last year at times. We were good when we were good, but when we weren't quite so good, we went under.

"We weren't good in the first half and we won the half. That's a positive sign for me."

Swindon are only outside the top three on goal difference following a 1-0 win at Cambridge.