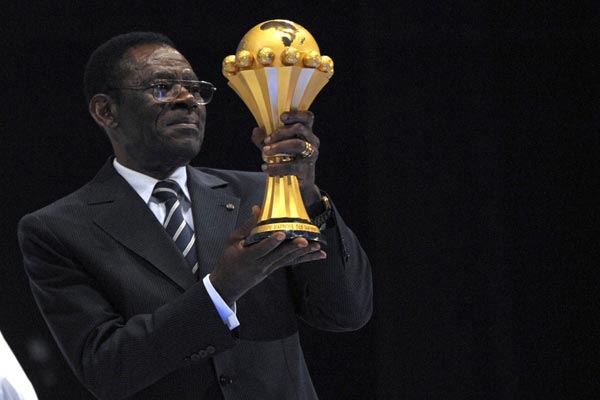 Equatorial Guinea President Teodoro Obiang Nguema holding the trophy of the African Nations football Cup during the draw ceremony in Malabo on October 29, 2011. All eyes in Africa will be focussed on Equatorial Guinea on December 3, 2014 as the capital of Malabo plays host to the draw for the Africa Cup of Nations.
Share

All eyes in Africa will be focussed on Equatorial Guinea on Wednesday as the capital of Malabo plays host to the draw for the Africa Cup of Nations just weeks after Morocco were stripped of the right to host the event.

The traditional ceremony to determine the group matchups for the January 17 to February 8 continental showpiece, was initially set for Rabat before Morocco asked for the tournament to be postponed because of the devastating Ebola outbreak which has cost nearly 7,000 lives in west Africa.

Morocco were instead not only stripped of the right to host the tournament but disqualified from the event as Equatorial Guinea, the third highest producer of petrol in Sub-Saharan Africa, stepped in at the final hour to save the day.

Equatorial Guinea, who co-hosted the 2012 event with Gabon, face a race against time to be ready with less than two months until kick-off, and the draw is set to unveil further indications of progress on preparations.

One aspect that hasn't changed is the format with four groups of four teams drawn in a round-robin first round line-up shared between the cities of Malabo, Bata, Mongomo and Ebebiyin.

Ironically, Equatorial Guinea will be in the top seeded hat as hosts, just six months after the former Spanish colony were disqualified from qualifying after fielding an ineligible player during a preliminary round fixture against Mauritania.

They will joined, as one of the top four seeds, by four-time champions Ghana, 2012 African winners Zambia and the Ivory Coast.

The 'Elephants' of the Ivory Coast, who lost finals in 2006 and 2012 and also reached the semi-finals in 2008, remain a formidable force as the seedings were determined by previous CAN results.

Their glory teams of the past have undergone several changes in recent years as they turn to life without retired legend Didier Drogba and now lean on the coaching leadership of dashing Frenchman Herve Renard who led Zambia to their first title three years ago.

Manchester City's Yaya Toure and Roma striker Gervinho are key players for the Ivory Coast with a strong cast of talent in place to support the 1992 champions.

The 'Desert Foxes' of Algeria reached the second round of the World Cup for the first time this year, and are chasing a second African title after their only success on home soil in 1990.

The country are enjoying a purple patch with top club ES Setif recently winning the African Champions League and the CAN providing a serious opportunity to increase their flourishing international reputation.

Cameroon, now without former captain Samuel Eto'o, failed to qualify in 2012 and 2013 which dropped their ranking while Senegal have failed to get past the first round since 2006.

The 'Indomitable Lions' of Cameroon, won the last of their four African titles in 2002, when they defeated a Senegal team making their lone appearance in the championship match.