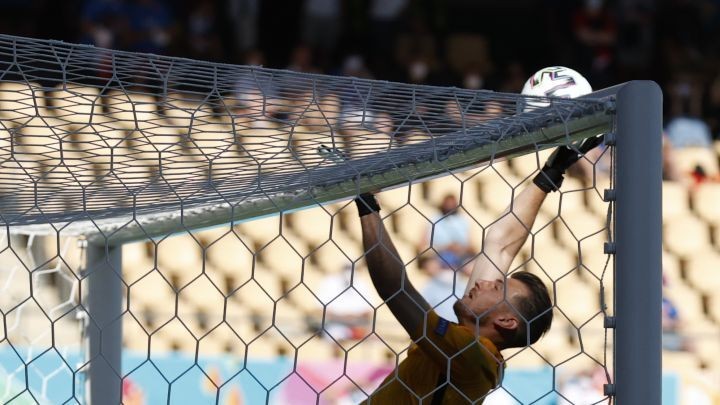 Sweden topped Group E with a 3-2 win over Poland, while Spain took second place following a 5-0 rout of Slovakia.

The scene was set in Group E on Wednesday. Spain took to a very warm pitch in Seville knowing that they needed a win over Slovakia but also knowing that they had problems to sort in front of goal. Sweden and Poland met in Saint Petersburg, the Swedes already qualified, but with a chance of securing top spot, and their opponents at risk of exit.

A missed penalty in the 11th minute for Morata was a blow to the Spanish hopes of their critical win requirement. The game continued to see some scintillating play from the 'home' side and after failing to capitalise on some decent opportunities, they had Slovakia goalkeeper Dubravka to thank for palming the ball into his own net, rather than over it, as a Sarabia shot rebounded high off the crossbar. And as the first half drew to an end, a Laporte header gave them a cushion.

The second half started and within ten minutes Sarabia had swept home a low Alba cross to make it three. Things were coming together at last for Luis Enrique's men. Just after the hour mark, Ferran Torres came on for Morata and immediate flicked in number four. That was quickly followed by Spain's fifth goal as another defensive error saw Kucka score Slovakia's second own goal of the evening.

The Swedes were off to a flying start, Forsberg with a fine finish inside two minutes. There were also some other early chances that followed, one that had Lewandoski a whisker away from equalising. It stayed that way till half time.

Around the time that Spain were going three up, Forsburg was stroking home his, and Sweden's, second to double their lead. No sooner had they, though, Lewandowski was keen to make his mark...and what a mark it was, curling into the far corner. But Sweden found the winner in injury time through Claesson to win the game 3-2.

The final matchday 3 results see Sweden and Spain go through to the last 16. Sweden top the group with 7 points and are still waiting to know who their next-round opponents will be; Spain finish second with 5 points and will meet Croatia, who finished second in Group D. Slovakia finish third but with three points and a goal difference of -5, they will not be among the top-four third-placed teams that qualify for the last 16. A poor tournament for Lewandowski and Poland, as they bow out with just one point after two defeats and one draw.