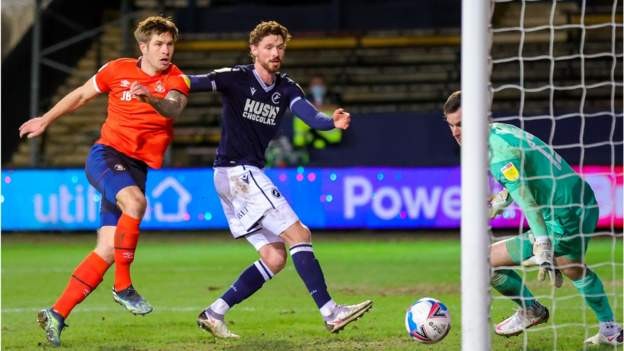 George Evans' 95th-minute header earned Millwall their 16th Championship draw of the season to rescue a point against Luton Town at Kenilworth Road.

January signing Elijah Adebayo looked to have won it for the hosts after opening his Luton goalscoring account in the 55th minute.

The former Walsall striker was given his first start by Hatters boss Nathan Jones and responded when he trapped Ryan Tunnicliffe's right-wing cross beautifully at the far post before rather scuffing a low left-foot shot which squirmed under Millwall keeper Bartosz Bialkowski.

But Gary Rowett's Millwall are not renowned as the second tier's draw kings for nothing, and Evans salvaged yet another point to stretch their unbeaten run to eight games, five of which have been draws.

It was midfielder Evans' first goal for the club since arriving from Derby on transfer deadline day at the start of the month.

But, although Adebayo could have made it 2-0 moments after his goal, when he headed over at the back post, Millwall deserved an equaliser for their spirited late finish.

First, Scott Malone's cross almost caught out keeper Simon Sluga, who had to tip onto his own bar and behind.

The Croatian then stood up excellently to keep out Mason Bennett's close-range shot, then tipped away Jed Wallace's free-kick, before Mahlon Romeo scuffed waywardly after a rare short set-piece.

Matt Smith then hooked a volley over at the back post following a deep cross. But big striker Smith's aerial presence proved telling when he headed on for former Manchester City youngster Evans to steal in at the far post and head home.

Dan Potts (Luton Town) wins a free kick in the defensive half.

Goal! Luton Town 1, Millwall 1. George Evans (Millwall) header from very close range to the centre of the goal. Assisted by Matt Smith with a headed pass.

Mahlon Romeo (Millwall) wins a free kick in the defensive half.

George Evans (Millwall) wins a free kick in the defensive half.

Glen Rea (Luton Town) wins a free kick in the defensive half.

James Collins (Luton Town) wins a free kick in the defensive half.