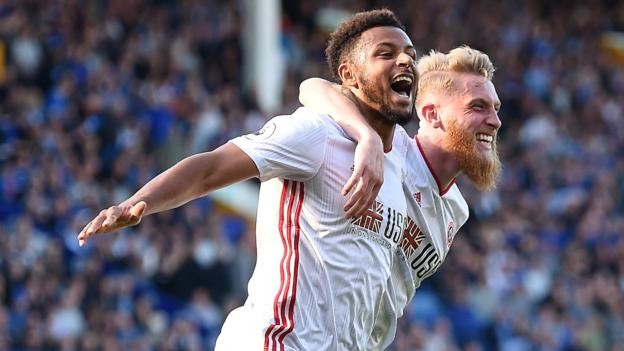 Sheffield United won away for the first time on their return to the Premier League as a Yerry Mina own goal and a late Lys Mousset strike condemned Everton to defeat at Goodison Park.

The Toffees had won their first two games on home soil this season and dominated for large periods of this game as they looked to bounce back from defeat at Bournemouth last time out.

However, they fell behind five minutes before the break when a ball from an Oliver Norwood corner deflected off Mina to land in the back of the net.

The Blades withstood huge pressure as the home side looked to rescue something from the game and, although Bernard had a penalty appeal waved away, Everton struggled to find a way through a resolute defence.

Chris Wilder's side made certain of a superb away victory when substitute Mousset raced through before calmly slotting beyond Jordan Pickford for his first Sheffield United goal.

The win means Sheffield United move up to eighth with eight points, four clear of the relegation zone. Everton, who were booed at the final whistle, are 14th with six points.

Sheffield United made a strong start to life back in the Premier League, with four points from their first two games. But home defeats to Leicester and Southampton suggested the early momentum was on the wane.

The Blades have, however, been a tough side to defeat on the road, with Chris Wilder's side unbeaten away from home since the middle of January.

They showed great resilience to come back from 2-0 down to draw 2-2 at Chelsea in their last away game, and they executed their game plan superbly against an Everton side that until Saturday had a 100% record on home soil this season.

The visitors' back three of John Egan, Jack O'Connell and Chris Basham were superb throughout, limiting Everton to mostly half-chances. On the few occasions the home side did get through, Dean Henderson put in a commanding performance in the Sheffield United goal.

Home form is always key to a side's hopes of avoiding relegation, but the South Yorkshire club's strong away displays will stand them in good stead to avoid an immediate drop back to the Championship.

Inconsistency has been a concern for Everton this season, with the Blues following up good performances with disappointing ones.

They have collected just one point from a possible nine on the road, but at Goodison the Toffees had been strong, and this game presented an opportunity for Marco Silva's side to make it three wins from three.

Everton dominated from the outset with their attacking quartet of Richarlison, Moise Kean, Bernard and Gylfi Sigurdsson at times linking up excellently.

However, their defence had shipped seven goals in their previous three games and they were once again suspect at the back on the rare occasions Sheffield United got into the Everton half. Passes often went astray while they dithered on the ball inside their own box for far longer than the home fans were comfortable with.

Under Silva, Everton have conceded more goals from set pieces than any other side in the Premier League, so for Sheffield United's goal to have come from a corner perhaps came as little surprise.

But a concerning statistic for Everton fans is that their side has never come from behind to win during Silva's tenure, and as this game wore on they became increasingly desperate in their search for an equaliser.

Everton have conceded at least two goals in each of their last five games, something Silva will need to rectify soon, particularly with free-scoring Manchester City their next opponents at Goodison Park.

Richarlison (Everton) wins a free kick in the attacking half.

Phil Jagielka (Sheffield United) wins a free kick in the defensive half.

Yerry Mina (Everton) wins a free kick in the defensive half.

Enda Stevens (Sheffield United) wins a free kick in the defensive half.

Attempt blocked. Theo Walcott (Everton) right footed shot from the right side of the box is blocked. Assisted by Cenk Tosun.

Goal! Everton 0, Sheffield United 2. Lys Mousset (Sheffield United) right footed shot from the right side of the box to the centre of the goal. Assisted by John Lundstram with a through ball following a fast break.

Enda Stevens (Sheffield United) wins a free kick in the defensive half.

Attempt blocked. Cenk Tosun (Everton) left footed shot from the centre of the box is blocked.

Attempt blocked. Moise Kean (Everton) right footed shot from the centre of the box is blocked. Assisted by Alex Iwobi.

Attempt missed. Chris Basham (Sheffield United) header from the centre of the box misses to the left. Assisted by John Fleck with a cross.

Séamus Coleman (Everton) wins a free kick in the defensive half.

Gylfi Sigurdsson (Everton) wins a free kick in the defensive half.

Attempt missed. Gylfi Sigurdsson (Everton) right footed shot from outside the box misses to the right following a corner.

Attempt saved. Moise Kean (Everton) right footed shot from the right side of the six yard box is saved in the centre of the goal. Assisted by Richarlison.