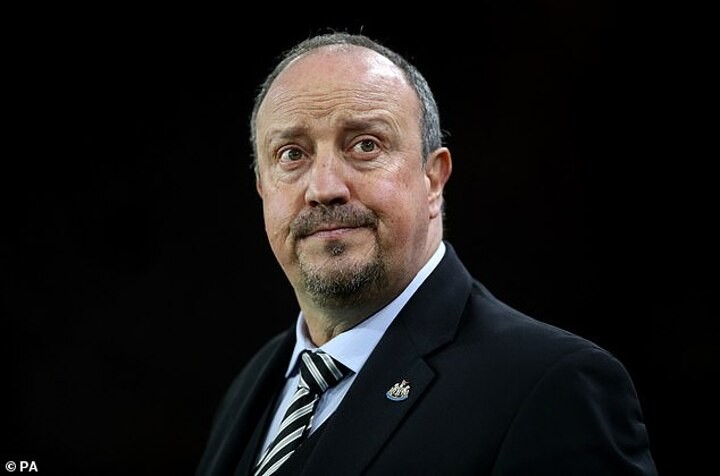 Angry Everton fans have hung anti-Rafael Benitez banners outside Goodison Park in protest at the Spaniard's talks to take over as manager.

The legendary Liverpool manager, who famously won the Champions League during his six years in charge, is still worshipped at Anfield.

And his connection to the Reds means swathes of Everton supporters are furious at the prospect of the 61-year-old taking over on the blue side of the city.

On Thursday night, banners were seen outside Goodison with a clear message that fans do not want Benitez.

One read: 'F**k off Benitez you fat Kopite c***', while another simply read 'Benitez not welcome.'

Benitez has a wealth of experience and is undoubtedly qualified to take the job but the board are split on appointing him.

Evidently, the massive fan backlash would only intensify if results started to go against him but he is expecting an official offer from majority shareholder Farhad Moshiri.

Sportsmail reported that Benitez has spoken to him three times in the last two weeks and although Moshiri does not enjoy unanimous backing, he is in charge of developments.

One barb in particular sticks out to many Everton fans. Benitez labelled them a 'small club' following a 0-0 Merseyside derby in February 2007.

His family still live in Liverpool and are deeply connected to the community so it would be a natural fit for the manager to seek the position.

Everton legend Neville Southall echoed the sentiments of many fans, telling talkSPORT: 'I think Rafa Benitez is a good manager, but is he right for Everton? No. Not a chance! He's Liverpool, the fans won't have it.

'So, for me, I would rather have Duncan Ferguson (the former Everton striker and Ancelotti's assistant manager).

'We're never going to get relegated and he's a good manager, I think he's far underrated than anyone else.

'He started before Carlo Ancelotti and put us on a good run, he's knowledgeable in everything he does, he knows the club inside-out, he knows all the younger players, so why not give him a season's contract?'

They have spoken to Ferguson and Brighton boss Graham Potter is also a potential candidate if Moshiri decides to avoid further fan backlash by opting to move away from Benitez.