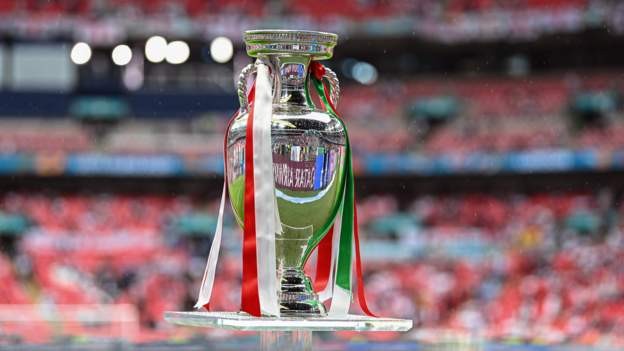 Everton's new stadium is one of 14 venues in the UK and Republic of Ireland's bid dossier for hosting Euro 2028.

The Bramley-Moore Dock stadium, which is still being built, is set to be completed in 2024.

Belfast's new Casement Park Stadium is also on the shortlist, although work has not yet started on the site.

The five football associations have to submit a final list of 10 stadiums to Uefa in April 2023.

In a joint statement, the England, Wales, Scotland, Northern Ireland and Republic of Ireland football associations, said: "Together, we believe we can deliver a world-class tournament, and that hosting Uefa Euro 2028 will achieve a strong and sustainable legacy for football and wider society, helping to drive economic growth in local communities."

The associations hope previous records of staging successful sporting events in the UK and Ireland will show they have the "expertise and experience to take this world-class tournament to new heights."

They had previously considered seeking to stage the World Cup in 2030 and conducted a £2.8m feasibility study into a potential bid.

But in February they decided to focus their efforts on Euro 2028.

The UK-Ireland bid faces competition from Turkey, with Uefa's executive committee set to make a decision on the hosting nations for Euro 2028 and Euro 2032, in September 2023.