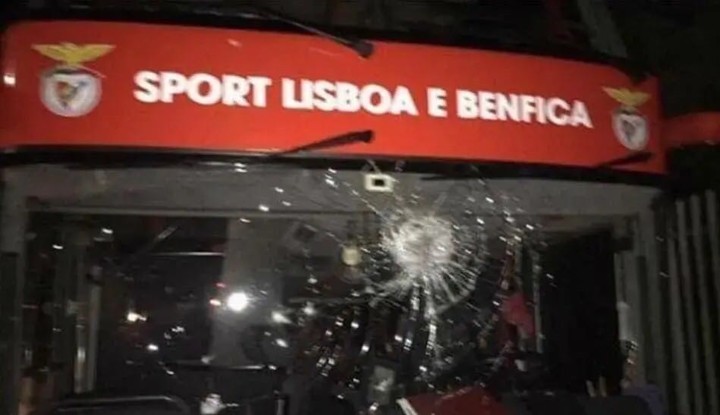 Julian Weigl and Andrija Zivkovic have reportedly been taken to hospital after the Benfica team bus was stoned by angry fans, according to A Bola.

The incident occurred after Benfica's first game back since the coronavirus pandemic shutdown, when they were held to a 0-0 draw against Tondela.

The long-awaited return for football in the country appeared to be going well, with touching gestures in stadiums around the league, however the apparent attack on the Benfica team bus ended the day in disgrace.

Reports say that the players were both hit in the face by shards of glass from the bus' windscreen after it was hit by rocks.

The bus was apparently under escort from local police as it returned from the stadium to Seixal, however the attacker has not yet been identified.

They were treated at the club's training centre nearby, and were then taken to Hospital da Luz as a precaution.

With scarves replacing fans and an eagle mascot making its traditional pre-game flight, Benfica were held to a 0-0 draw by Tondela on Thursday, missing a chance to take the outright lead of the Portuguese league in the team's first match since the competition was halted nearly three months ago because of the coronavirus pandemic.

Thousands of scarves with the club's red and white colours were placed on the seats at the Stadium of Light to represent Benfica fans as the club returned to action a day after rivals Porto lost 2-1 at Famalicao in their first game back.

The pair of results left the clubs tied with 60 points with nine rounds remaining. Porto had carried a one-point lead from before the pandemic.

The Benfica scarves on the stands had messages such as 'always together' and 'wherever you are.' A big banner with the words 'here we are' was seen above the scarves in one of the seating sections.

Before the match, one of Benfica's eagle mascots flew around inside the stadium in a tradition that happens before every home match.

'It's ugly to play in an empty stadium,' Tondela coach Natxo Gonzalez said. 'I don't get football without fans, but we have to get used to this new reality.'

Needing a win to overtake leaders Porto, Benfica dominated from the start against 13th-place Tondela, creating more than 20 attempts without being able to capitalise. Benfica were denied twice by the woodwork near the end.

'They always played with 10 men behind the ball, it was tough,' Benfica midfielder Adel Taarabt said. 'We kept trying and trying but the ball just wouldn't go in. Of course we missed our fans, but that can't be used as an excuse.'

It was the third consecutive draw for the defending champions, and the second at home. Benfica haven't won in four straight matches at the Stadium at Light in all competitions.

Earlier on Thursday, Maritimo and Setubal played to a 1-1 draw to stay in the bottom half of the table.

Sporting Lisbon played Vitoria SC later on, where photos of fans were placed on the seats in the empty stadium.