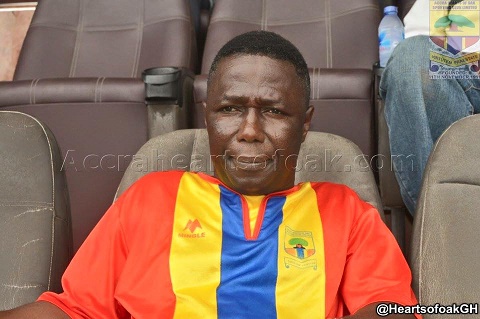 Former Hearts of Oak Board Member Dr Poku Sampene says Alhaji Akambi and Vincent Odotei-Sowuah should be blamed for the current happenings at the club.

Vicent Odotei and Alhaji Akanbi, board members of the club have been fingered to be interfering in the work of the technical team.

Hearts fans held a protest at the club's secretariat on Wednesday to demand explanations from the Board and also called for the dismissal of the duo.

Dr Opoku Sampene is of the view that Alhaji Akambi and Vincent Odotei-Sowuah are the main problems, according to inside sources within the club.

“The supporters are hurt and complain to some of us when they see us. We will not sit and watch Alhaji Akanbi, Sowah Odotei and others to run the club down.”

The former Hearts chief also blamed the supporters for not acquiring more shares during the floatation.

He indicated that Hearts doesn't have an effective Board as the majority shareholder Togbe Afede XIV runs the whole show.

"Hearts don’t have a board. Togbe Afede XIV has his own men in the board who are like rubber stamps. They only work on what Togbe desires and will please his interest. The situation is such that if he (Togbe) as the majority shareholder is not ready to relinquish his shares, there is no way a change in how things are at the club will be realized,” he said on Nhyira FM.

The Supporters have given the Board up to a week to heed to their demands or face their wrath.