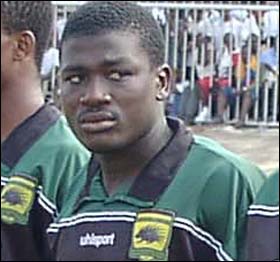 Duah was one of the home-based players invited by then Black Stars coach Mariano Barreto for the start of the qualifiers in June 2004 against Burkina Faso.

The burly striker was introduced in the 78th minute as Ghana made a false start in a 1-0 reverse played in  Ouagadougou.

But he dropped out of the team due to injury which cost his form as Ghana recovered to book one of the five tickets for Africa.

''I wasn't disappointed to miss the tournament because I got injured so I out of the Black Stars. In my absence, those who were invited performed so getting back into the team was difficult

''But I appreciate [Ghana FA] for what they did. For playing part in the qualifiers, I was given US$ 1,000 for my contribution. After receiving it, I was delighted my efforts were recognized.''