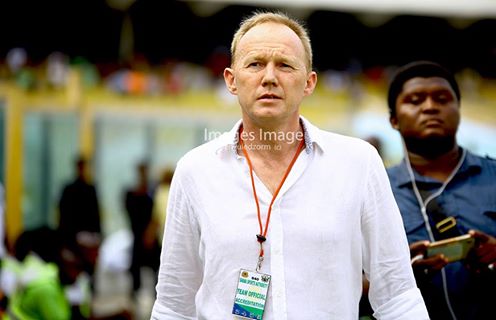 Former Zamalek coach Frank Nutall has sympathized and condemned the unfair treatment of Ben Acheampong by the Egyptian club.

Acheampong has demanded respect and fairness after being duped over $1.1 million in entitlements by Zamalek.

The club also forced the Ghanaian footballer to waive his salary or forfeit his move to the Qatari side when he decided to terminate his contract.

His former agent Nader El Sayed tried to falsify documents for him to agree and accept the $250,000 settlement from the initial $1.1million owed him.

Cas rebuked the club's "merciless" and "intimidating" attitude to Acheampong and the pressure put on him to sign the 'settlement agreement'.

Zamalek have been ordered by the Court of Arbitration for Sports (CAS) to pay the attacker after unilaterally cancelling his contract.

Acheampong who is yet to receive a dime after the CAS ruling on the matter two months ago has received support from the ex- Zamalek coach Frank Nuttal. Nuttal also advised other foreign players not to join the club or suffer the same fate.

"As a former coach at this club, I support and empathize with this player, and would never advise anyone to join them. If you know, you know. I wish you the best of luck", he said in a post.

Frank Nuttal departed Gor Mahia for Zamalek in March 2016 but left the club just after 54 days after he was sacked by club president Mansour.

Ben Acheampong joined the Cairo club on a four-year deal in 2017 but terminated his contract after 11 months.