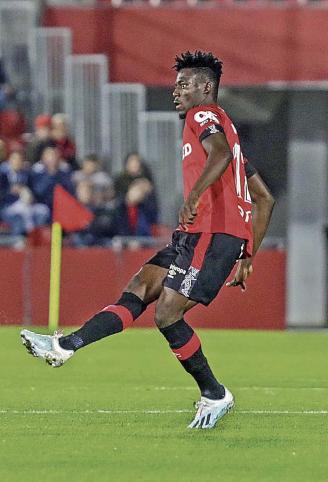 The Rojiblancos are a little light in midfield following the exit of the Ghana international.

Atlético Madrid have signed Uruguay midfielder Lucas Torreira but Diego Simeone is said to be unhappy with his midfield options.

The capital-based side have a 30-day period to sign a domestic replacement.

This is in accordance with LaLiga Santander rules where the club is granted a period of 30 days to sign a player from a team within Spain.

And reports from the Spanish capital indicate that Atlético Madrid have identified Real Mallorca king-pin Baba Mohammed as a replacement for his compatriot.

Mohammed had a breakthrough season with Real Mallorca in the top-flight last term.

He missed just two games out of the 38 round of matches as the club failed to retain their league status.

The 24-year-old has begun the Segunda Division strongly, making 4 appearances to help place the side in 7th position after 4 round of games.

Should the transfer materialized, Mohammed will miss the first half of the 2020/21 UEFA Champions League as Atlético Madrid submitted their squad-list on Tuesday, October 6.