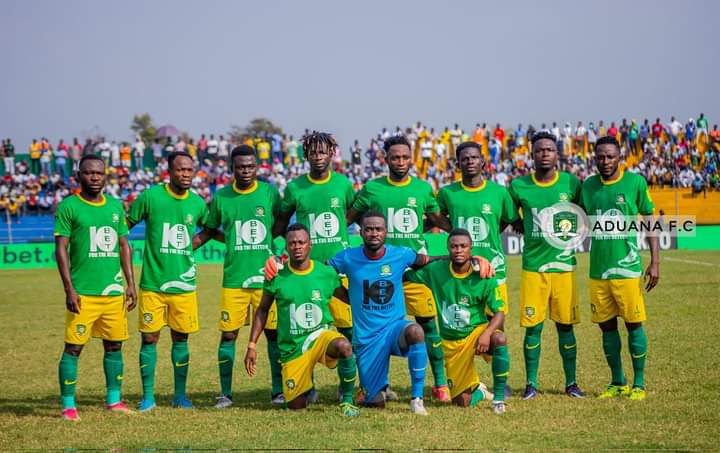 Aduana Stars booked their place in the last four of the FA Cup on Wednesday after seeing off King Faisal Babes in the quarter-finals at the Nana Agyemang Badu Park in Dormaa Ahenkro.

The Ogya Boys recorded a deserving 3-2 victory over the Green and Whites to ensure their place in the semi-finals of the cup competition.

Aduana trainer Ben Zola made a couple of changes to the team that lost 2-1 to Great Olympics over the weekend in the Ghana Premier League in Accra.

Faisal assistant Fatawu Abubakar was at the dugout to direct affairs following the departure of head coach Nurudeen Amadu who stepped down from the role last Sunday.

Abubakar made two changes to the team that started in Sunday's 1-0 loss against bottom placed Elmina Sharks FC in the Ghana Premier League.

Wisdom Appasu was handed his very first start in the Green and White shirt while Zubairu Ibrahim returns to the starting after a lengthy layoff.

Aduana scored the opening goal of the match through Sam Adams who converted a penalty in the 21st minute after Baba Yahaya brought committed a foul inside the box.

The hosts doubled their advantage in the 25th minute with a goal for striker Abdul Manaf Mudasiru.

Faisal pulled one back before the break with a fine finish from Zubairu Ibrahim.

Substitute Ibrahim Osman scored from the spot to reduce the deficit for the Faisal in stoppage time as they crashed out of the competition.

Aduana will take on regional rivals Bechem United in the semi-finals.