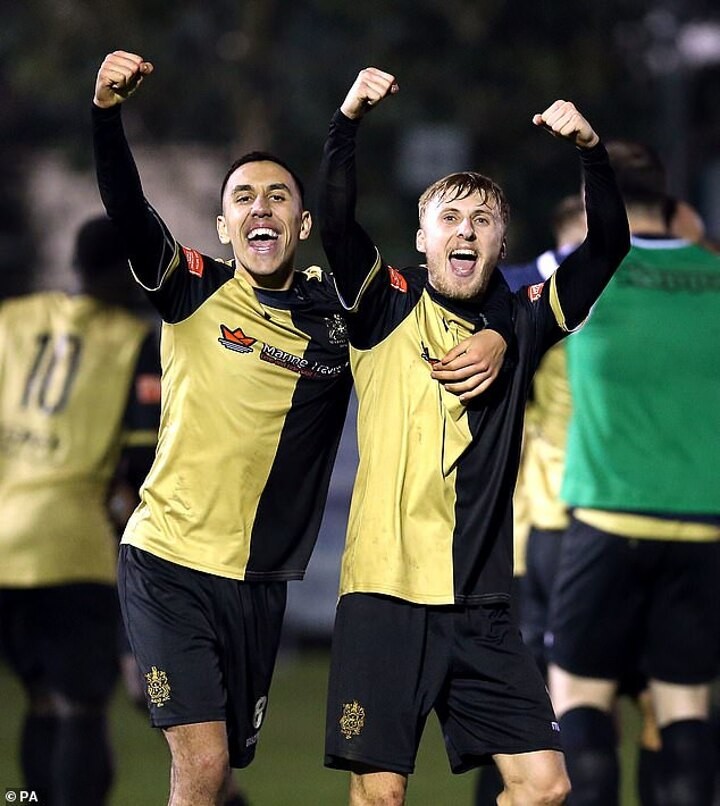 It's that time of the year again. Christmas is over, New Year has been and gone and the third-round of the FA Cup is swinging into view.

One of the most eagerly-anticipated weekends of the footballing calendar will feel very different this year with no fans allowed in.

There may be no pitch invasions that have come to define the biggest shocks of the world's oldest cup competition, but the chance of an upset remains. Sportsmail takes a look at 10 of potential upsets that could take place over the coming days...

Carlo Ancelotti is enjoying an impressive first full season at Goodison Park, with Everton pushing for a Champions League place.

But if the Italian is truly to bring the good times back for the Toffees, then ending the fans' 26-year wait for silverware must be his priority.

It is more pointed now after last month's agonising late defeat in the quarter-finals of the Carabao Cup to Manchester United.

With Everton having had a week off since their New Year's Day defeat by West Ham, expect Ancelotti to go semi-strong here with a hint of rotation. Amid the general chaos of this truncated season, this is a huge opportunity for Everton to finally end the drought.

Rotherham, one point off the bottom of the Championship, should pose few problems.

Derby truly are in a relegation battle. Wayne Rooney has taken interim charge but results remain inconsistent, with two wins in their last five.

A cup run would have been the last thing on their minds before their preparations were thrown into disarray after an outbreak of coronavirus.

Now Rooney and the entire first-team squad will miss the game, with the Rams set to field academy players so that they can avoid forfeiting their place in the competition.

County are prioritising survival this season, and National League North minnows Chorley could be forgiven for smelling blood here.

Even factoring in Derby playing the kids, it will still require an enormous effort from Chorley to pull off a big shock. And what's more, the expectation will be there that they can do it.

After the high of a draw at Anfield, Sam Allardyce has well and truly been brought back to earth with a bump.

Nine goals conceded and none scored in home games against Leeds and Arsenal will have Allardyce facing up to the reality of what he has got himself in for at the Hawthorns.

An FA Cup run will not be on his agenda. West Brom are six points off safety and look well short of what is required to stay in the Premier League.

With a derby against Wolves coming up next week, Allardyce will be fully focused on the trip to Molineux.

Ten years ago this was a Premier League clash, but now Blackpool are entrenched in League One. Former Liverpool Under 23 boss Neil Critchley is in charge, and guided an understrength Reds side to victory over Shrewsbury in the fourth-round last year.

He will fancy his chances of causing an upset here, with the Baggies' minds firmly elsewhere.

Chris Wilder is in danger of recording the worst season ever by a top-flight side in England. Even that Derby County side of 2007-08 won a league game and got through to the fourth-round of the FA Cup.

The Blades are 12 points off 17th placed Brighton having earned only two of their own from 17. But they have a very winnable home fixture with Newcastle coming up next week.

Will Wilder look to rest players to prioritise that game? Will he play his first-team and hope victory can inject some much-needed confidence? What if he does play his strongest XI and they lose again?

He is in an unenviable position. But for League One Bristol Rovers this is something of a free swing. They are only three points above the drop zone but have games in hand. Blooding the nose of a struggling Premier League side will have them licking their lips.

Burnley don't really do cup runs. In Sean Dyche's eight seasons in charge he has only once been past the fourth-round, in 2017.

Even when the Clarets have been comfortably in mid-table or even the top-half of the Premier League, Dyche has shown little interest in a run deep into the cup.

Even so, they have suffered only one third-round defeat in the last five years. Having shown signs of a revival in the past month they are starting to pull clear of the drop zone now.

Ahead of hosting Manchester United next week, Dyche is likely to rest and rotate here. That presents a chance for League One MK Dons, but Lincoln are the only lower league side to have beaten Burnley in the cup in the past five years.

The Clarets usually have enough in reserve to pull through in these games, and the chance for a shock may not be as high as some may think.

Pressure is building on Frank Lampard after a rotten run of results over the Christmas period. The Chelsea boss is not believed to be under serious threat right now, but should

Morecambe pull off the unthinkable on Sunday, might Roman Abramovich be tempted to pull the trigger?

It would be tempting to think it couldn't get much worse for Lampard, but the FA Cup is well behind the Premier League and the Champions League in the club's list of priorities for the remainder of the season.

A top four finish is a bare minimum expectation for Lampard after the £230m summer spending spree. That said, they will surely have too much for League Two opponents, even if Lampard rings the changes.

Morecambe are riding high and challenging for the play-offs, but it is a daunting trip to Stamford Bridge they face. Six years ago Jose Mourinho's Chelsea suffered an inexplicable reverse at home to Bradford, but it seems unthinkable that an upset could be on the cards here.

Crawley Town are one of the form teams in League One and pushing hard for promotion. Hosting Leeds will be a chance for The Reds to gauge their progress this season.

And they have more than a fleeting chance of causing an upset. Marcelo Bielsa has shown little interest in making of a fist of things in the cups yet.

He is out to avoid a third successive third-round exit in the FA Cup, but his priority remains league form. In previous years Leeds have been solely focused on Premier League promotion, now it is survival.

They may be comfortably 12th and 11 points clear of the drop zone, but Bielsa will not want to take any chances by prioritising a cup run, as much as Leeds fans yearn for a first major trophy since winning the final First Division in 1992.

Leeds have six days between this cup clash and hosting Brighton, but Bielsa will still want to rest and rotate and give chances to players who have been on the fringes so far. That will open the door for Crawley, but you still fancy the Premier League side in this scenario.

Marine have not played since Boxing Day, train just twice a week and celebrated reaching the third-round with a dash to the Co-op for drinks. The world will be watching to see if the minnows can pull off a giant killing for the ages against Tottenham.

It is a crying shame that fans will not be present at the 3,185-seater Rossett Park, but the ingredients are there for a cup classic. The non-league outfit from Crosby were 168 places below Spurs in the footballing pyramid when the draw was made in November, the biggest-ever gap between clubs in third-round history.

Marine play in the Northern Premier League Division One North West and their side boasts a bin man and a PE teacher. Coming up against Jose Mourinho and England captain Harry Kane is the stuff of fairy tales.

Whether Mourinho will stick to his philosophy of nicking an early game, before sitting back and soaking up the pressure for 90 minutes against a bunch of part-timers remains to be seen. But this is a truly David against Goliath cup clash, and is one to be savoured.

Following on from Marine against Spurs on Sunday night will be no easy task, but Newport have shown over recent years that they can rise to the occasion.

In 2018 they were eight minutes away from knocking out Spurs after dumping out Leeds in the third-round, and in 2019 they beat Leicester and Middlesbrough before holding out for nearly an hour against Manchester City.

Last year they were easily seen off by Millwall, but they will be licking their lips at the prospect of hosting a struggling Brighton side.

Graham Potter's men are without a win in their last eight and sit just three points above Fulham in 17th, who have two games in hand.

The Seagulls are low on confidence in both boxes and could be there for the taking, but Newport have priorities of their own, sitting just a point behind League Two leaders Carlisle.

It has been a long road back for Stockport after they were relegated out of the Football League 10 years ago. They are on the march this season, sitting fourth in the National League and with games in hand on rivals.

They have been given main billing on Monday night, with David Moyes' West Ham coming to town.

Could it be a miserable return to the north west for the former Everton and Manchester United boss? The Hammers are comfortably mid-table this season, sitting 10th in the Premier League.

There really shouldn't be an excuse for not giving the FA Cup a go. But it has been five years now since they last got behind the fourth-round and they always seem the Premier League side most susceptible for an inexcusable cup blip.

Last year it was Oxford United in the Carabao Cup, and two years ago it was AFC Wimbledon at this stage of the FA Cup. The year before that it was Wigan.

However seriously Moyes treats the competition this year, every game against a minnow feels like a potential banana skin for the Hammers and it's no different in 2021.