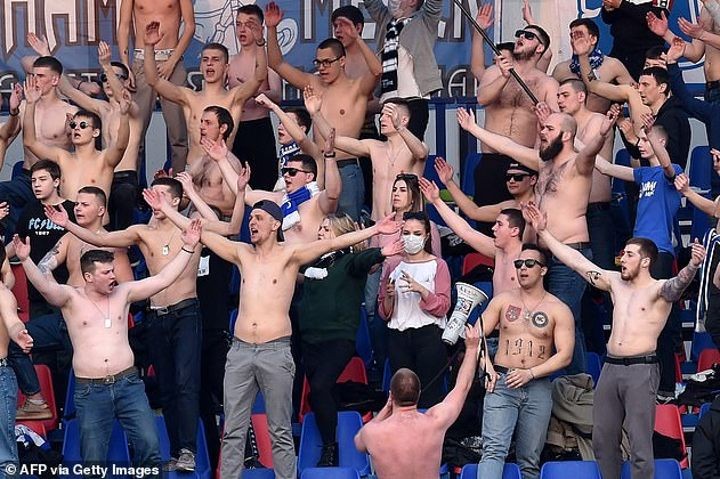 Fan groups are planning to boycott matches in the Belarus Premier League due to the spread of coronavirus despite government resistance to enforce social distancing.

The Belarusian league is the only active league in Europe, defying the continent-wide suspension that began last month due to the outbreak of the pandemic.

But supporters have now been forced to take matters into their own hands in the absence of government intervention, according to Pavel Klymenko.

He tweeted, 'More and more #Belarus fan groups announce boycott of matches over Covid-19 and call on everyone to self-isolate to prevent spread of the disease.

'Fun to be the only league playing due to government in denial, but fans dare to put health first'.

The country reported its first death on Tuesday, along with a surge in confirmed cases to 152.

Belarusian president Alexander Lukashenko has so far vowed to resist social distancing measures, which have seen sport continue to be played.

The head of the global football players' union Fifpro has said it is 'frankly not comprehensible' that football is continuing to be played in Belarus despite the coronavirus crisis.

Fifpro general secretary Jonas Baer-Hoffmann said: 'We're appealing for it to be taken with the same cautionary measures that have been taken in the rest of football.

'It is frankly not comprehensible how this could be going on.'

A full Premier League programme was played in Belarus last weekend and the next two matches are scheduled to take place on Friday in Minsk and Bobruisk respectively.

The Belarusian Premier League, which includes clubs such as BATE Borisov and Dinamo Minsk, have signed a string of TV deals as fans around the world seek to fill the void left by cancelled competitions.