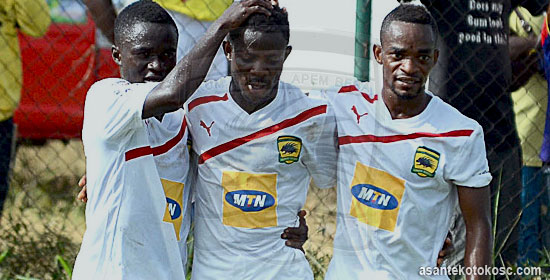 GHANAsoccernet.com is taking an in-depth look on why Asante Kotoko will retain their Premier League title in the upcoming season.

The Porcupine Warriors open their defence of the title they have now won back-to-back away from Kumasi even though it is their official home match as they continue to serve out a home ban for crowd trouble last season against Aduana Stars.

I am however of the conviction that the Fabulous lads already have a head start over their competitors even before the first whistle is blown for the start of the Ghanaian top flight this weekend.

These are five reasons why this faith of another successful title defence of Kotoko is envisaged.

Core team remains: The core of the Kotoko team despite their recent administrative problems remain intact. The team have suffered only two key exits unlike the recent past where the side was hit with a massive exodus of their quality materials. Apart from the departure of Rashid Sumaila [who wasnâ€™t their own player] and Kofi Nti-Boakye, every other player that grabbed the headlines last season are still with the club.

Quality Signings: The immense benefits of the buys of Abeiku Ainooson and Christoper Bonney was clearly evident in Kotokoâ€™s Super Cup win over Medeama on Sunday. While Ainooson is already hitting a harmonious chord in his partnership with Kwabena Edusei in the heart of Kotokoâ€™s defence, Bonneyâ€™s surging runs from the right served as a constant threat to Medeama on Sunday.

The Procupine Warriors have also signed an expreince goalkeeper in Jospeh Addo who will serve as a worth back up for the likes of Abdoulaye Soulama, Isaac Amoako and Felix Annan.

Not to also forget the return of Yahaya Mohammed, Jordan Opoku and Stephen Oduro. These are seasoned Premiership players and will give Kotoko that needed quality in becoming a formidable side again.

The Didi Factor: No doubt coach Mas-Ud Didi Dramani had a tough debut in the Ghanian top flight last term but crucially he managed to retain Kotoko as champions which was clearly the basic justification for him to him keeping his job.

He can only get better with the benefit of experience and knowing well at first hand what it takes to win a Premier League match in Ghana. He has also grown his relationship with a good set of players who should by now be abrest with the gaffers preferred tactics depending on the opposition since I know Didi likes to tinker a lot.

Supporters: Surely the current Kotoko crop wouldnâ€™t want to disappoint the massive support base of the side again. After the depression of the sideâ€™s early exit from the CAF Champions League last season, the player are well aware they will face the brunt of supporters if they fail to deliver again.

Again the support appears to be galvanizing again â€“ a situation which was fast diminishing following the recent administrative problems within the club.

Seemingly poor competition: I look at the great crop of players and the consistency of the Kotoko team and I struggle to find any club in the top flight that can match up with the same resources. I may be making a big mistake here as especially in Ghana football, not always the best assembled team come out victorious.

However on the FACE OF what the teams in this division look like, Asante Kotoko are clearly a mile ahead of their competition â€“ I mean this gulf in quality was clearly evident against Medeama â€“ a side that is expected to challenge for the title this season. They ended up being hammered 3-0, what more can I say?!