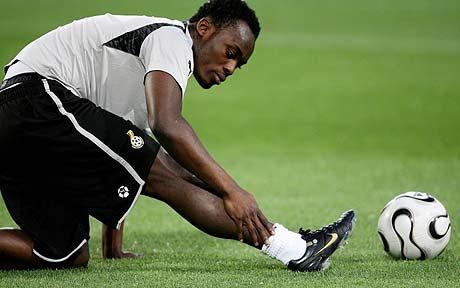 THE most telling sight was of Michael Essien showering team-mates with dressing-room champagne.

It left one question. If Chelsea can win the Double without the Ghanaian what can they achieve with him back next season?

Spraying passes around not the bubbly.

John Terry and Frank Lampard may be the heart of the team but Essien is the engine, the real driving force, the man who puts the miles on the clock.

Many will say that had he not been on the sidelines when Carlo Ancelotti's side took on Inter Milan in the Champions League then it would be Chelsea, not Jose Mourinho's team, aiming for the Treble this weekend.

Here is one massive reason why Chelsea can complete Roman Abramovich's dream of European glory next season.

Throw in the acquisition of merely one of three possible transfer targets - Fernando Torres, Kaka or Atletico Madrid striker Sergio Aguero - and Chelsea's European rivals will have real cause for concern.

At the same time, we have to evaluate exactly what Chelsea have achieved this season.

The first Double in the club's history - in Ancelotti's first season - is a remarkable success story. To chalk up over 100 league goals, scoring seven three times and another eight on the final day of the season to clinch the title, is an astonishing feat.

Not only has Ancelotti been brave enough to change the way the team plays but he has also brought out the best individually of the talent at his disposal.

Florent Malouda has emerged as one of the best in his position in Europe. Didier Drogba, despite all the histrionics, continues to be the man for the big occasion.

He also provided the moment of the final when, Basil Fawlty-style, he attacked the post after the woodwork had twice denied him (and his team five times).

While Frank Lampard, in what at one point we thought was a run-of-the-mill season, has gone past 20 league goals yet again.

Yet we still have to get it all in some sort of perspective.

This has not been a great season. I have constantly referred to it as 'The Season That Doesn't Make Sense' and it continued as such right to the end.

Chelsea could have scored five in the opening 45 minutes and yet Portsmouth might even have gone in at half-time in the lead.

And then the extraordinary business of TWO missed penalties.

While Kevin-Prince Boateng will be haunted by his truly shocking effort for the rest of his life, at least Lampard's - the first in Wembley history to miss the target - came with the old trophy virtually won.

The main worry for Frank is how to blot it out of his mind before an almost inevitable penalty shoot-out with England in South Africa next month.

But back to perspective and a season in which Chelsea's rivals have either stood still or regressed.

Ex-boss Mourinho made some valid points. Some might call it sour grapes but his arguments contained some telling points.

He said: "Arsenal won the title in 2004 in an incredible way. After that, they thought they could win in a different way. But they can't do that.

"United lost Cristiano Ronaldo. OK, Ferguson is a tremendous coach, the team is full of great players but Ronaldo is Ronaldo and scores 30 goals a season.

"He wins points. When the club and the league loses a player like Ronaldo it loses a lot.

"Liverpool is an incredible phenomenon. From 2004 to 2010 they have got worse.

"Yes, Spurs, Villa and Manchester City are coming teams but, overall, I didn't see this season as a clash of the titans at the top.

"Chelsea were also out of the Champions League very soon.

"They could concentrate on the league and they did it very well. Carlo is a very experienced coach and he kept the team cool, calm and focused."

Few will argue with such a fair assessment. Yes, there has been an enormous vacuum at the top. But Chelsea must be applauded for filling it, for taking advantage of the weakness of others.

Chelsea and Ancelotti are also to be applauded for their mental toughness in the wake of their 2-0 aggregate Champions League exit to Inter.

Yes, they had a wobble. But, at this precise moment, their great team spirit kicked in - it was all for one and one for all.

How they go on from here is the intriguing thing. Young fresh faces are to be promoted to the senior squad while one marquee signing has been promised.

The others will not stand still, either. City will again spend heavily, while Arsene Wenger could well embark on the biggest rebuilding campaign of his 14 years at Arsenal.

Next season is already starting to look like one hell of a contest. First of all, though, there's some other tournament to get our teeth into. Now what WAS it?