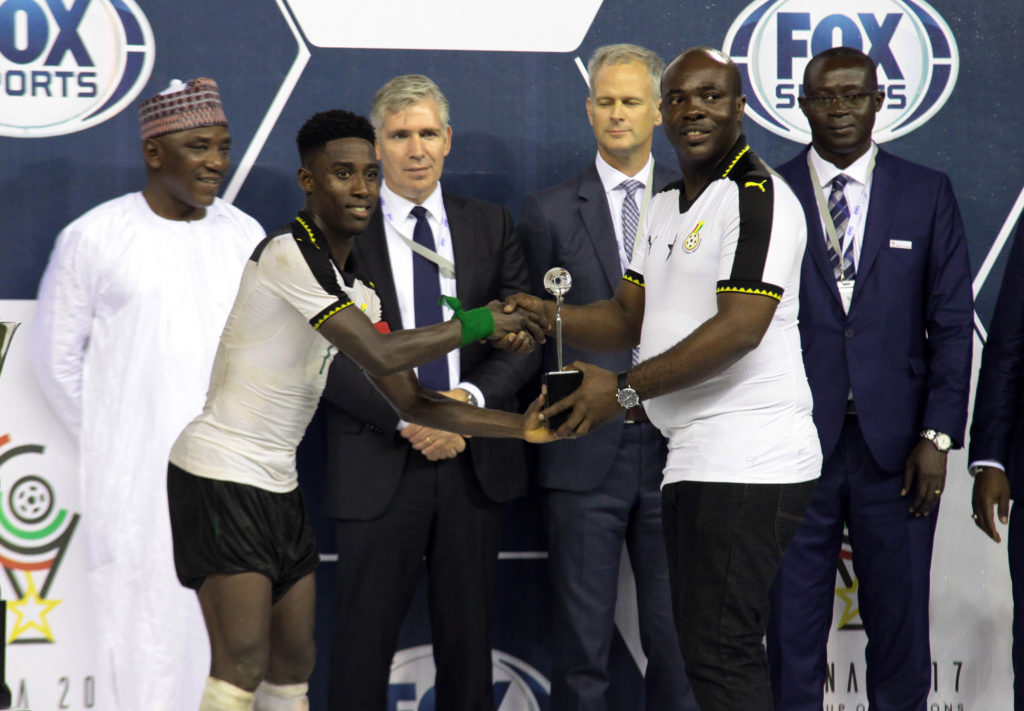 Isaac Twum during the 2017 WAFU Cup of Nations match between Ghana and Nigeria in Cape Coast, Ghana on 24 September 2017 ©Christian Thompson/ BackpagePix
Share

In this month of September, Cape Coast has been at the centre of interest for all the right reasons. Particularly, tourism in the Central Regional capital has heightened almost to a crescendo. Holiday lovers just love their September on the shores of the Cape Coast beaches.

Weekdays seem like weekends because the popular attractions in Cape Coast are basking in the patronage of their sites and activities; better than any other period in 2017.

Also in September, this city, with arguably the best Senior High Schools in Ghana, grew even more popular with the commencement of the Free SHS programme (a government policy of providing high school students with free access to education).

In the very first week of the month as well, the annual Fetu Afahye of the people of Cape Coast rocked the city. Real euphoria greeted this coveted event and the festival itself did not disappoint. On a lighter note too, a new song and dance called ‘One Corner’ gained notoriety in September as Cape Coast took it to a whole new level, especially during the Fetu Afahye festival.

But perhaps, the most significant highlight of this lovely month of September has to be the just ended WAFU Cup of Nations that took place here. WAFU, which stands for the West African Football Union, is a 16-member sub-regional football body consisting of countries including Ghana, Nigeria, Gambia, Benin, Niger and Senegal. The headquarters of this union is in Dakar, Senegal with Kwesi Nyantakyi, the President of the Ghana Football Association as the current president of WAFU.

Traditionally, Cape Coast is not the first stop for a tournament as huge as the WAFU Cup of Nations. Actually, the city had not even been tested in that regard. But after such an impressive hosting of this year’s tourney, the scripts are being re-written. An electric crowd powered up almost every match at the ultra-modern Cape Coast Stadium. The Minister of Sports said in an interview that ‘’the Ghana government will consider camping National teams at this Stadium prior to tournaments’’: a gesture that has been lauded by stakeholders.

Post WAFU Cup of Nations Ghana 2017, important lessons have been learnt. The tournament did not only draw attention to the region; it brought immense benefits especially to Cape Coast. Whilst patting the organizers on the back for a job well done, Jumia Travel takes a look at some of the benefits WAFU 2017 brought to Cape Coast.

Undoubtedly, the WAFU competition was the chief instigator of tourist activities in Cape Coast this month. Football fans and delegations from participating nations joined local and seasonal tourists to visit attractions such as the Cape Coast Castle, the Cape Coast beach and the Kakum National Park. Bearing in mind that here was once the capital of Ghana (then Gold Coast), there is plenty of African culture and history to experience. If WAFU brought anything at all, it put Cape Coast firmly on the tourism map in Africa.

Travel & Hospitality were the Biggest winners

The biggest winners of this WAFU Cup of Nations are those in the travel and hospitality industry in the region. For owners and managers of restaurants, pubs, shopping centres, lodges and hotels in Cape Coast, WAFU couldn’t have come at a better time. This peak season allowed these services to reap a chunk of profit whilst offering their best services. Some top Cape Coast hotels even had their facilities filled to capacity weeks before the event. Listening to the numbers that travelled to Cape Coast leaves hotels in Accra and other hotels in Ghana relishing an equal opportunity.

The Business side of WAFU in Cape Coast

To say that WAFU in Cape Coast was an economically viable step would be an understatement. In fact, many craft, paraphernalia and food vendors and hotels in Cape Coast admitted that September 2017 is one month they will never forget. Especially for itinerant retailers, the number of people visiting the city coupled with the various activities ongoing meant that the business transformed from an overly stressful daily routine to an exciting and invigorating activity: the kind that can be repeated un-end.

Sweet Victory, Another Trophy for Ghana

The WAFU Cup of Nations 2017 ended in grand style in Cape Coast. The sights and sounds in the stadium were reminiscent of the 2002 World Cup final between Germany and Brazil. Nothing was missing from the closing and medal ceremony. The media, both local and foreign were in full attendance. Of course, WAFU 2017 will be a memorable event for Ghana for years to come for the very reason that Ghana emerged as the eventual winners of the competition and in dramatic fashion too.

It ended 4 goals to 1 in favour of Ghana in the final. It was a sweet victory over familiar foe and rival Nigeria, all thanks to Cape Coast and its crowd. It goes without saying that when venues are being considered to host even bigger events and tournaments, Cape Coast will stand up there on the list among the bigwigs.

WAFU 2017 and Cape Coast were the perfect couple these past few weeks in September. All eyes will be on the city to host the next WAFU Cup of Nations. But for this, 3 big cheers for Cape Coast.