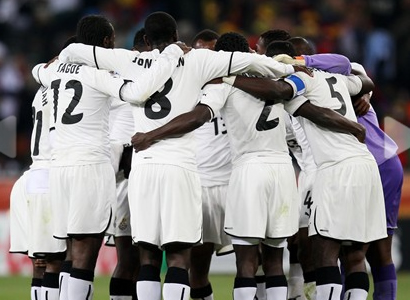 Ghana's Black Stars has been ranked the seventh best team at the 2010 World Cup even though they were eliminated at the quarter final stage.

The final standings of the competition was released by World soccer governing body, Fifa on Thursday ahead of the third-place playoff and the grand finale on Sunday, 11 July.

Conspicuously missing from the standings are the first to fourth placed teams since the outcome of the matches were unknown at the time of the release of the rankings with Spain, Netherlands, Germany and Uruguay expected to fill the vacuum later on.

The standings was influenced by the performance of the respective teams including points haul from matches, goals scored, goals conceded and the general team conduct amongst others.

The current position of the Black Stars serves as a great improvement on the team's ranking after its 13th position in the Germany 2006 FIFA World Cup, where they were also the only African team to have gone past the first round.

Four-time Africa champions,Â CameroonÂ who lost all their three games were ranked 31st just above Korea DPR, who perched at the bottom (32nd spot), and also recording the heaviest defeat by losing 0-7 toÂ Portugal.

Below is the full rankings from 5th to 32nd positions;