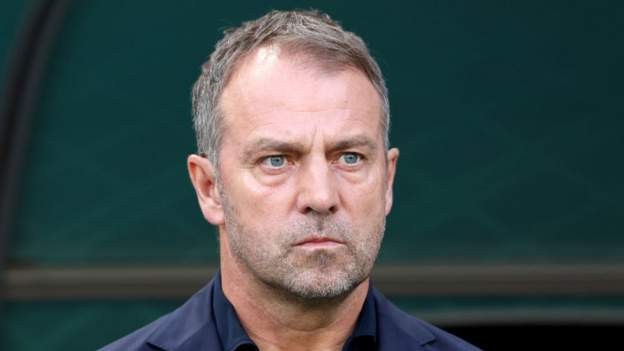 Head coach Hansi Flick says Germany's World Cup clash with Spain is a "first final" as they try to avoid another early exit at a major tournament.

After shock 2-1 defeat to Japan in their opening game, another loss to Spain could end Germany's hopes of progressing in Qatar.

"The last two tournaments were not [good]," Flick said.

Spain come into the match aiming to book a place in the knockout stage after a 7-0 thrashing of Costa Rica in their opener.

Head coach Luis Enrique, however, expects a tough game against the under-pressure Germans.

"Without a doubt, they are the team that is most similar to Spain in terms of dominating the play and controlling it," he said.

"That is a beautiful challenge for us. I think it will be an open game."

Luis Enrique has hinted at making changes despite Spain's 7-0 win against Costa Rica.

Germany will monitor winger Leroy Sane, who has been sidelined with a knee problem.

Niklas Sule, normally a central defender, struggled at right-back against Japan and could be replaced by Thilo Kehrer or Lukas Klostermann.

Flick could also shift Joshua Kimmich to right-back and change his midfield.

If Japan avoid defeat against Costa Rica in Sunday's first game, then Germany would be out with another loss. Spain will go through if they win and Costa Rica are beaten.

This is a hard one to call. Germany are inconsistent but you can see the way Hansi Flick wants to play.

They will try to take the game to Spain but that is very dangerous.

Spanish football expert Guillem Balague was another to appear on our 5 live World Cup preview show and he said Spain might struggle to score goals, but they have not made a bad start with seven in their first match.

I can see this ending a draw, which would not knock Germany out but leave them on the brink of a group-stage exit for the second successive World Cup.

Chris Sutton's predictions for the second round of World Cup games

The Germans have won just one of their last seven matches against the Spaniards, including a 6-0 defeat in the Nations League when the sides last met on 17 November 2020. That was Germany's heaviest defeat since 1931.Spain are bidding to win consecutive World Cup matches for the first time since recording six successive victories on the way to lifting the trophy in 2010.Luis Enrique's side scored as many goals in the 7-0 win versus Costa Rica as they did in four matches (comprising 390 minutes) at the 2018 World Cup.Germany won each of their first eight matches under Hansi Flick, but have claimed just two victories in nine games since (D5, L2).