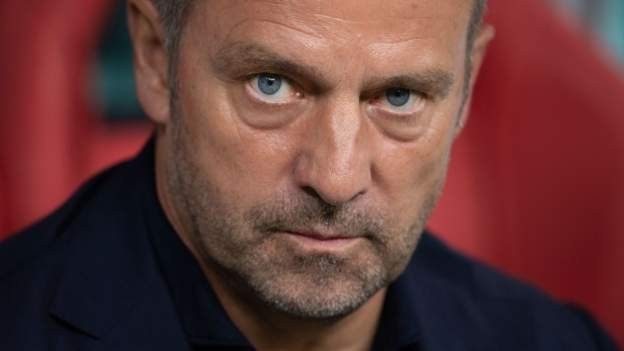 Hansi Flick is to remain as Germany manager despite his side's group-stage exit at the World Cup in Qatar.

Their third-place finish in group E marked the second consecutive World Cup at which Germany have failed to progress to the knockout stage.

Earlier in the week, technical director Oliver Bierhoff had his contract ended.

But the German football association (DFB) has chosen to keep Flick as manager before a home European Championship in 2024.

"My coaching staff and I are optimistic about the European Championship in our own country," said Flick.

"As a team, we can achieve a lot more than we showed in Qatar. We missed a great opportunity there. We will learn our lessons from that."

DFB president Bernd Neuendorf said: "We have full confidence in Hansi Flick that he will master this challenge together with his team."