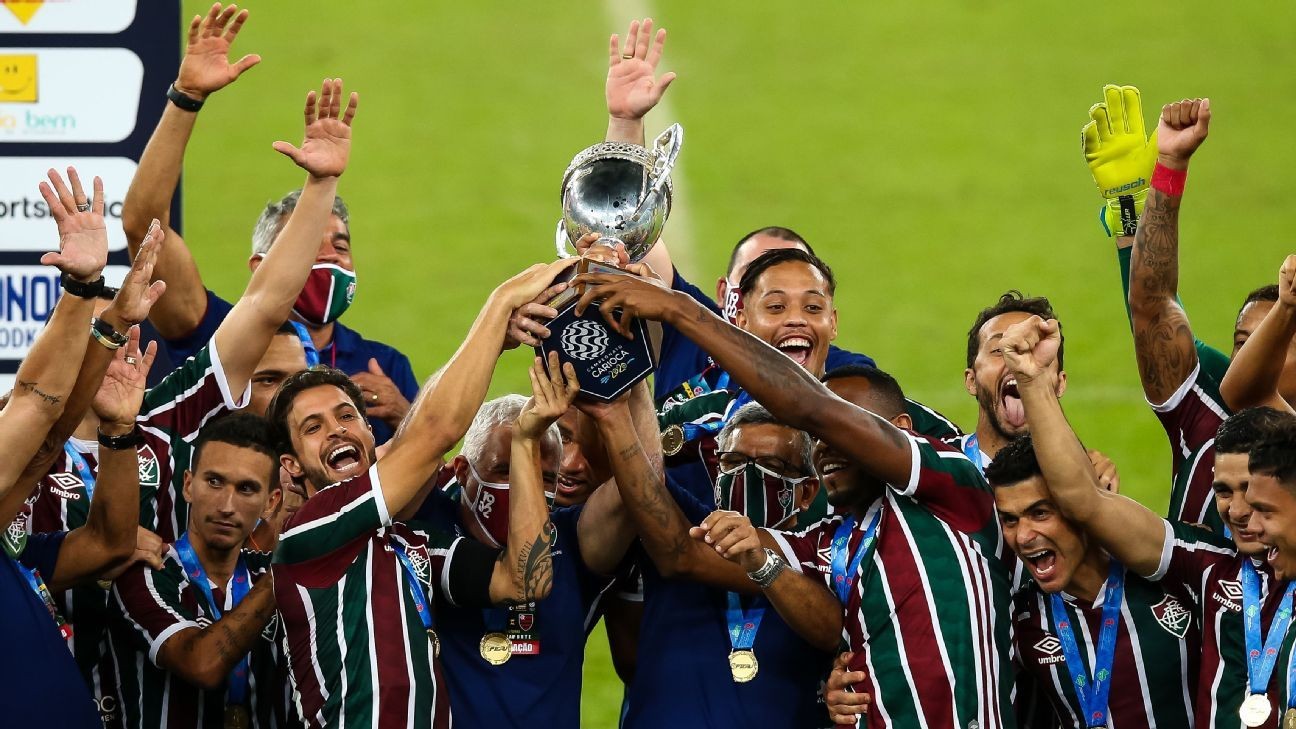 Fluminense met Flamengo on Wednesday night in the final of the Taca Rio, part of the Rio de Janeiro State Championship. It was a match that would define whether or not there will be two more finals between Fluminense and Flamengo. And if that seems bizarre, it may well be the most logical element in a farcical situation in which football is tangled up in government regulations and TV rights.

Perhaps the most surprising aspect is that football has actually returned to Rio. The first national league to restart in South America will be that of Paraguay, which kicks off on July 17. But the coronavirus has taken a grand total of 20 lives in Paraguay. Compare that to Brazil, where the grim number has topped 68,000 and continues to rise by over 1,000 a day. Rio is second only to Sao Paulo in the number of deaths. And yet the Rio Championship was, by some distance, the first Brazilian State competition to return on June 18. The southern state of Santa Catarina, much less affected, got going on Wednesday. Others hope to follow soon.

The two main drivers have been President Jair Bolsonaro, who has continually argued for a reopening of the economy, and Flamengo. As far as Bolsonaro is concerned, the return of football sends a powerful signal.

Flamengo, the country's most popular team and the reigning Brazilian and South American champions, have been his allies. The outcome was the issuing of a presidential decree (known as an MP) which changes the way that TV rights are sold. Under the previous legislation, the rights to any match belonged to both teams. The MP stipulates that the home side owns the rights, and can sell them as they please. Bolsonaro acknowledges the influence of Flamengo chief Rodolfo Landim, which is why it's widely referred to as the "Flamengo MP."

For the national championship, due to kick off on Aug. 8, this was important as the rights are split between two broadcasters. Most teams have signed with the local powerhouse, TV Globo. Some have gone with Turner, the U.S.-based cable company. Under the old regulations, games between a Globo team and a Turner team could not be televised as both clubs had to be with the same broadcaster. But the MP requires only the consent of the home team, which means all games can be shown -- and that could be better for the clubs, the sponsors and the fans.

The MP takes the opposite approach to the most successful European leagues, in giving the power to the home team. But in Europe the clubs negotiate collectively. This, unhappily, is a panacea in Brazil, where the rule of "every club for itself" prevails. It is possible, then, that the MP might be an improvement, and Flamengo are by no means the only club to think so.

But -- or, if you prefer, two buts -- it's complicated. The first problem is the very nature of an MP. These decrees last for 120 days, by which time they must be approved by Congress or they become null and void. The MP, then, needs to be put to the vote. Most would hardly see this as a matter of urgency and there are certainly much more important claims on the time of the politicians. And even if it is put to the vote and passes, it may undergo considerable amendments along the way. There is no way of knowing what will happen at the end of the 120 days.

The second problem is the doubt about whether or not the MP can be applied to existing contracts, signed under the previous legislation, which is proving so controversial in the Rio Championship. Globo have the rights to this competition; they have signed 11 of the 12 clubs. But they could not agree terms with Flamengo -- whose matches, in consequence, were not being screened. This explains Flamengo's urgency to restart. Armed with the MP, they started broadcasting the games on their own TV channel, which appears to be an important project for the club.

Globo's understanding was that this infringed the terms of the contract. It announced that as its rights had not been protected, it would not be screening the rest of the championship. A legal ruling then obliged it to show last Sunday's semifinal between Fluminense and Botafogo -- two teams who were against the return of football and who were playing under protest. It was a match between two teams who did not want to play, screened by a broadcaster who did not want to broadcast. It could only end in a dull goalless draw, good enough to take Fluminense through to the final against Flamengo.

At this point the story takes on an extra surreal twist. The old Rio rivals would meet at the Maracana, a neutral ground. So who would be the home side? It's a question which, for the purposes of TV rights, has now become so important. A draw took place. Fluminense won, they would be the home team.

Globo won the right not to show the remainder of the championship, having appealed the previous legal ruling. But it happily bequeathed the rights to Fluminense, who could show the game on their YouTube channel. Flamengo, who had lobbied so hard for the rights of the home side, now cried that this was absurd. In order to safeguard the rights of fans to watch the game, they announced that, in breach of the "Flamengo MP," they would show the game on their own TV channel. The local sports tribunal, perhaps not the most adequate forum for this type of dispute, gave them permission to go ahead. Just an hour before kickoff, Fluminense had the decision overturned on appeal.

Maybe it's fitting that all this nonsense took place on the anniversary of Brazil's historic 7-1 semifinal humiliation against Germany in the 2014 World Cup. Because the shenanigans, cheap oneupmanship and lack of collective sense can only be seen as a defeat for the Brazilian game.

And there could be more to come. After a 1-1 draw, Fluminense keeper Muriel, older brother of Liverpool's Alisson, shone in the penalty shootout to help his team win the Taca Rio 3-2 on spot kicks. Had Flamengo won, they would automatically have been crowned overall Campeonato Carioca champions. But with Fluminense winning, the format means the two teams must now face each other twice more to decide the outcome of this controversial competition.