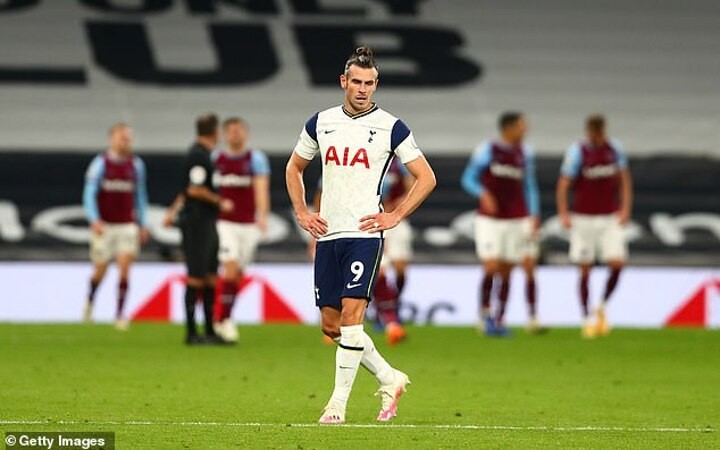 Jose Mourinho could only assess that 'football happened' after the Portuguese boss was left stunned by Tottenham blowing a 3-0 lead at West Ham on Sunday.

Spurs looked on course to continue their high-scoring form in style after Heung-min Son fired in with less than a minute on the clock. Harry Kane assisted his strike-partner with a stunning pass, then bagged a double before the 16th minute.

The North Londoners were cruising as loan signing Gareth Bale came on with 72 minutes gone but West Ham punished their complacency with three goals in the final 12 minutes - the last a 94th minute screamer from Manuel Lanzini.

'Of course I have to analyse the second-half and do it internally but I prefer to say that football happened and praise West Ham's belief,' Mourinho told Sky Sports post-match.

'I knew that they are a completely different team this season. It's a big punishment to conceded three goals but in the end it's deserved.

'The context of the game was that it was in control. Kane and Bale could have killed the game and it was going more towards a fourth for us. But that's football.

'We didn't drop off deliberately. Their belief went up and my guys were not strong enough to cope with it psychologically.

'I told them to keep the same (at half-time) and be aware of lost of set-pieces. David found a new Fellani in Tomas Soucek.

'They were very lucky but they worked hard to be lucky and I praise them.'

Spurs missed the chance to go second in the Premier League but the quality of their goals and the strength of Kane and Son's partnership has set the foundations for a potential title challenge.

Bale's first game back in England was far from a success, missing a one-on-one which could have killed the game, but as the Welshman settles into regular game-time again the Londoners' threat could grow.