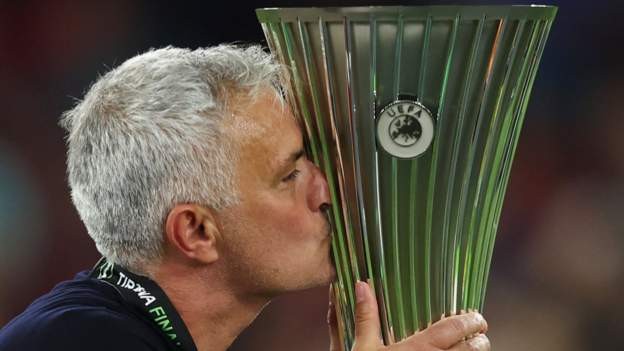 Jose Mourinho has enjoyed greater achievements in his glittering managerial career, but Roma's Europa Conference League triumph reduced him to tears after the 'Special One' delivered the Italian club their first major European trophy.

Europe's third-tier club competition has been derided in some quarters, but for Mourinho the win over Feyenoord was every bit as important as his two Champions Leagues triumphs with Porto in 2004 and Inter Milan in 2010.

"He's a serial winner and he has brought this Roma team to life."

This was the 26th trophy of Mourinho's managerial career - 19 years after he masterminded Porto's Uefa Cup win in 2003.

He was announced as Roma boss last May and was tasked with building the club up after a disappointing seventh-placed finish in Serie A in 2020-21.

"Mourinho said it wasn't part of the plan [to win the trophy]. The plan was to build this team, it was the start of the project," Joe Cole, who played under Mourinho at Chelsea, told BT Sport.

Roma's run to the final was not all smooth, with the Portuguese coming under fire after an embarrassing 6-1 defeat by Bodo/Glimt in the group stage last October.

"The great thing about my career is that, aside from the Europa League with Manchester United, doing it with Porto, Inter and Roma is very, very, very special," Mourinho said.

"It is one thing to win when everyone expects it, when you made the investments to win, but it's quite another to win when something feels immortal, that feels truly special.

"This remains in the history of Roma, but also mine. I was told only I, Sir Alex [Ferguson] and Giovanni Trapattoni won trophies in three different decades. It makes me feel a little old, but it's nice for my career."

Mourinho has installed a spirit and togetherness that has seen Roma bounce back and secure a first trophy for 14 years.

The hard work, according to Cole, has only just started.

"Roma have gone through a few managers, lost a direction and an identity. Jose's loved in the city but there is a way to go," he added.

"These scenes now, especially for the lads who've come through the ranks at Roma - you cannot go to that city and not feel the club.

"Football is a religion there and they will feel like heroes and be remembered, but this is the start of the journey. Jose will be back in the office, planning whether they can have a go at the Europa League and get closer to titles."

This was Mourinho's first trophy since winning the Europa League with Manchester United in 2017.

Chris Smalling was part of the United side that defeated Ajax in Stockholm five years ago and the 32-year-old defender produced a man-of-the-match performance to help secure Roma a first trophy since 2008.

"Even when I first came to Roma three years ago, it was a long time since they had won a trophy," said Smalling.

"So we knew how much it was going to mean for everyone at Roma tow in something."

Smalling's post-match interview on the pitch with BT Sport was gatecrashed by team-mate and England forward Tammy Abraham.

"He's the best," said a jubilant Abraham before planting a kiss on his Smalling's cheek.

Such has been Abraham's impact since joining Roma from Chelsea for £34m last August that he finishes his first season in Italy with 27 goals, a European trophy and a place in Gareth Southgate's England squad.

"One thing I said when I came was I was going to help my team get to the final and win a trophy in my first season. Credit to my team-mates for excellent performances," said Abraham.

Eccentric exercise: Is muscle lengthening more effective than muscle contracting?The dumbest genre in entertainment?: Delve into the history of reality TV and its effects on our lives