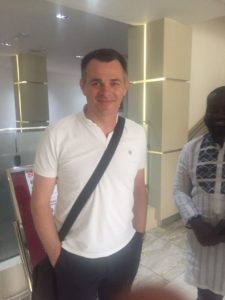 Ex-France star Willy Sagnol has completed a his interview with the Ghana Football Association for the Black Stars coaching job, Ghanasoccernet.com can reveal.

The former Marseille player was interviewed at the Alisa Hotel in Accra confirming Ghanasoccernet.com's report that he has arrived in the country.

Sagnol was the first to be attended to by the search committee among the five-shortlisted coaches.

The 40-year-old has previously coached the France Under-21s and Ligue 1 side Girondins Bordeaux.

Ghana’s Black Stars have been without a substantive coach since Avram Grant’s contract ended in February.

The Football Association instituted a six-man search committee led by it’s President Kwesi Nyantakyi which attracted a reported 132 applications after a 10-day period.

The 40-year-old has previously coached the France Under-21s and Ligue 1 side Girondins Bordeaux.

According to sources at the corridors of the football governing body, the committee intends to complete the interviews with the three coaches( Kwesi Appiah, Hugo Broos and Willy Sagnol and two others)  by Sunday, April 2.

They will after the final report on a preferred coach for the Black Stars to the Executive Committee for approval.