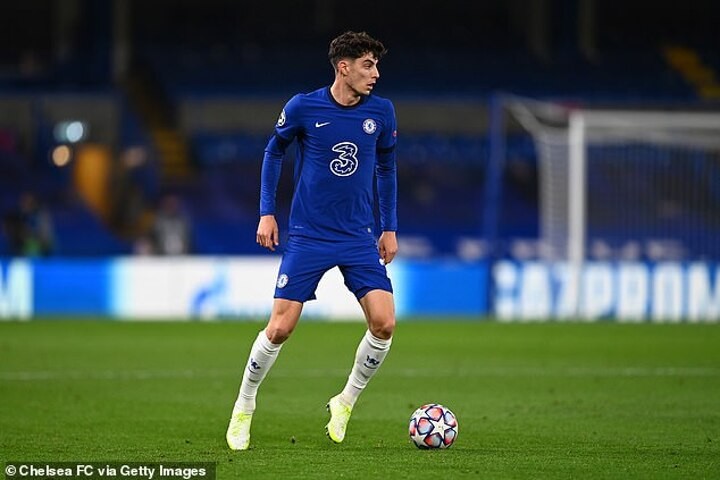 Frank Lampard's role for Kai Havertz in the Chelsea attack is fairly obvious, but the jury is still out on the 21-year-old attacker.

The Blues' new £89million signing has shown some promise, such as a hat-trick display in the EFL Cup win over Barnsley and getting his first Premier League goal in the 3-3 draw with Southampton, but question marks still exist about Havertz's role in the side.

The German was disappointing in Chelsea's 0-0 draw with Sevilla, while former Blues star Frank Leboeuf publicly admitted he was 'unconvinced' by the former Bayer Leverkusen man despite netting four goals so far this campaign.

And with a trip to Manchester United next up for Lampard's west Londoners, the Chelsea manager needs to work out a system that suits Havertz and the rest of his attacking stars ahead of a crucial match-up.

Lampard's intentions are clear with his forward line overall: Timo Werner will lead the line but the three players behind him - most likely being Mason Mount, Christian Pulisic and Havertz -  will act in a flexible and fluid system in order to confuse defenders.

The Blues have started their more recent games with Pulisic operating from the right and Mason Mount cutting in on the left to allow Ben Chilwell to bomb forward on the left touchline.

This leaves Havertz in the classic No 10 role behind fellow countryman Werner, which does suit the 21-year-old in some aspects.

One of Havertz's key attributes is his timing of runs into the penalty area, which was seen when he latched onto Werner's pass to tap home for his first top-flight goal against Southampton last weekend.

Though against Sevilla in Tuesday's goalless draw at Stamford Bridge, with the LaLiga outfit proving to be a more difficult side to break down, the young German drifted around the pitch and was rather ineffectual in this role.

In the Champions League tie, Havertz failed to register a single shot or key pass in the 90 minutes in west London, while he also managed just one dribble all match - which epitomised how Chelsea failed to find their key men in good areas to test the Sevilla defence.

The German's passing game was the  bright aspect of his Sevilla performance, registering an 80 per cent accuracy from 50 lay-offs - only four of Chelsea's starters managed a better rate.

With Manchester United showing their defensive solidity in their midweek win at Paris Saint-Germain, Havertz will need to show more creativity if Lampard's side are to get a result at Old Trafford.

As Chelsea's front four are rather flexible, another option could see Havertz adopt the central striker role with Werner making way to the left-hand side. The No 9 role was where the 21-year-old thrived at Bayer Leverkusen last season, particularly after lockdown.

Havertz scored five goals in the first four games after the Bundesliga's coronavirus hiatus, but scored just once when he reverted back to the attacking midfield role for the final few matches of the German league campaign.

This tactic could be useful if Chelsea decide to adopt a counter-attacking style at Old Trafford this Saturday as Havertz can hold the ball up in central areas before feeding the likes of Werner and Pulisic, who are blessed with more pace than the 21-year-old.

There are complications to that system, however, that Lampard is already aware of. Havertz played the central role during Chelsea's 2-0 defeat by Liverpool in September, which saw the Reds dominate the opening half, leaving the German attacker isolated up front.

The 21-year-old was taken off at half-time and the Blues being down to 10 men at the break was a significant reason behind this change but Lampard's men also needed a different plan up front.

Chelsea's trip to Manchester United will be the first real indication of how far the Blues' new recruits have improved the club after a fourth-placed finish last season.

With the Premier League season already a month underway, Lampard could do with things falling into place for his big-money signing.